Whether you like to admit it or not, ‘pretty’ patterns and bold colors draw the eye. Don’t believe us? Imagine if someone set two bowls of food in front of you.

Plate A is adorned with bright and brilliant hues, while Plate B is devoid of anything but dull and dark edibles. If you have no idea what’s on either plate, you’ll generally pick Plate A because it appears to be more colorful and vibrant. The same logic applies at the marijuana shop. You will always be drawn to cannabis that is brightly colored.

We usually think of cannabis in terms of its color green. In reality, strains such as Critical Kush, Grape Ape, Panama Red, and Serious Six include a variety of colors, including pink, purple, blue, red, and orange.

Breeders have noticed that consumers prefer vibrant cannabis in the modern era, so new strains are bred. However, what is the purpose of marijuana’s various hues?

Phytochemicals are organic compounds found in plants that contribute to the various hues of cannabis. It’s a misconception that strains with strong colors are more powerful than those with subtle tones. Bright colors, on the other hand, aren’t necessarily more appealing; this is because color has nothing to do with a marijuana plant’s cannabinoid concentration, which is the true measure of potency.

The other key element of the cannabis plant is its color.

Each plant contains a huge number of these tiny hairs, which cover the buds. During the vegetative stage, these hair catch pollen and emerge from the calyx. They stay white until the end of the blooming stage.

The pistils alter color when the plant is almost ready to harvest. The change in hue depends on the type of strain, but typically the pistils will turn either a burnt orange or fire red. Make sure to harvest when no more than 70-80% of the pistils have changed color.

The most well-known phytochemicals, as well as the colors they create, are next. 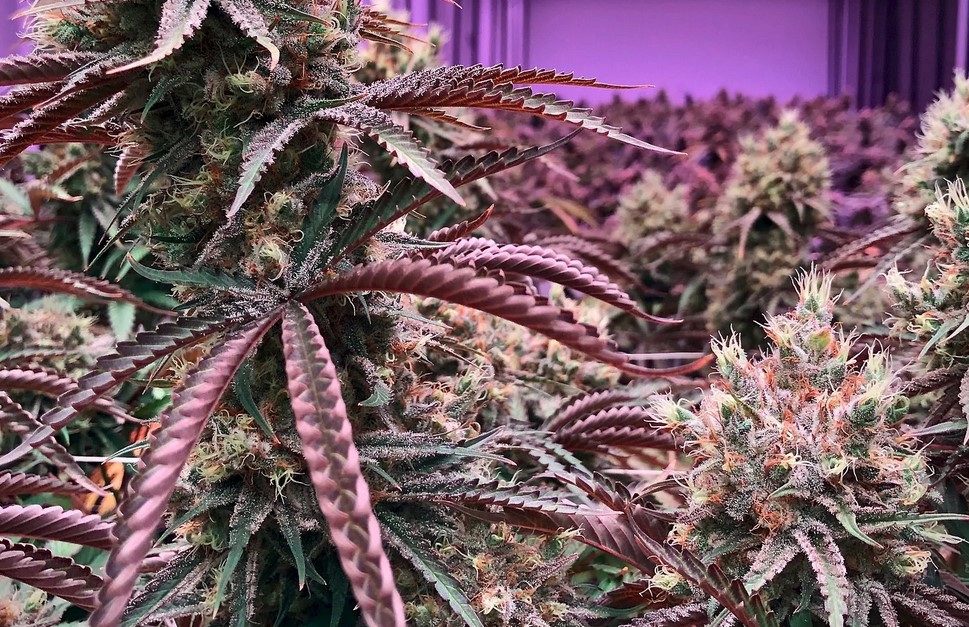 Anthocyanins – From Yellow/Orange to Blue, Black or Even Red

Anthocyanins are a family of pigment molecules that may be found in flowers, fruits, and vegetables. The color you see is determined by the pH of the plant’s environment. An anthocyanin gives your cannabis its typical purple or blue hue. Because of this pigment molecule, red weed occasionally appears. Anthocyanins do not contribute to the flavor or fragrance of your marijuana.

By altering the light spectrum in LED lighting, you can increase anthocyanin production. Since these molecules function as the plant’s sunscreen, intensifying light exposure will result in stress that will ultimately elevate anthocyanins. However, be cautious of overdoing it as too much stress will damage your plants beyond repair.

There are purple strains, such as Vietnamese Black, that get their name and color from the anthocyanins they contain. Other popular purples include Granddaddy Purple (GDP) and Purple Haze. Blue Cheese and Blue Dream are famous blue strains, while Red Dragon is one of the better-known ‘red’ cannabis strains.

Chlorophyll is the most abundant pigment in plants, accounting for about 70% of the colors. It’s why marijuana is green.

Chlorophyll is essential for all plant life as it allows plants to absorb enough light to photosynthesize. Photosynthesis is the process of synthesizing organic matter from inorganic matter using energy from light. Chlorophyll usually masks other pigments, which is why most plants have a green hue.

Marijuana strains such as Green Crack, Green Goblin, and Green Haze have a rich green color.

Carotenoids are ubiquitous among living organisms, but they especially important to humans because they influence vitamin A production. As most people know, vitamin A is key for growth and vision in human health. All plants create carotenoids during photosynthesis, although the presence of chlorophyll usually hides them from view.

During the fall season, when plant chlorophyll levels are decreasing, carotenoids may occasionally display their vibrant hues. Lycopene is one of the most prevalent carotenoids in plants and contributes to the red tints.

Flavonoids are what give flowers their vibrant colors. They can be found in all above-ground parts of plants and play an important role in photosynthesis by blocking out harmful UV rays. Anthoxanthins, which are water-soluble pigments that range from cream to yellow in color, are some of the most prominent flavonoids in plants.

You may also observe strains with a lot of trichomes that appear to be frosted or white in color. White Rhino and White Widow are two of the most well-known.

Other Reasons for the Colors of Cannabis

There are a variety of things that may impact the color of cannabis plants, including:

When your marijuana plants are first growing, you’ll probably see that they have very intense green coloring. However, you usually won’t see more colors until the flowering stage. This is because the photoperiod (the amount of light exposure) is essential for a plant’s coloring. Once you reduce the amount of light exposure to force the marijuana plant into flowering, you may see a color change in the leaves of some species.

The formation of sugar is called photosynthesis, and it begins as soon as the plant germinates. After flowering, however, this process becomes more intense. The biological maturation of the plant causes chlorophyll production to slow down and ultimately cease as the plant uses its resources to aid in the ripening of flowers. This is known as senescence, and it gets worse with each passing stage of bloom development. As a result of this process, some leaves wither and die once the flower develops fully.

Warm temperatures and cold temperatures have a significant impact on cannabis color. If you keep your plants in chilly environments for an extended time, chlorophyll production will be limited. Keep in mind that chlorophyll tends to cover other hues. When you decrease its presence, secondary pigments such as anthocyanins become more visible.

The reason some marijuana plants turn dark blue or purple near harvest is due to the presence of anthocyanins. If concentrations of anthocyanins are low in colder temperatures, carotenoids will become more prominent and cause the plant to take on gorgeous orange and yellow hues. 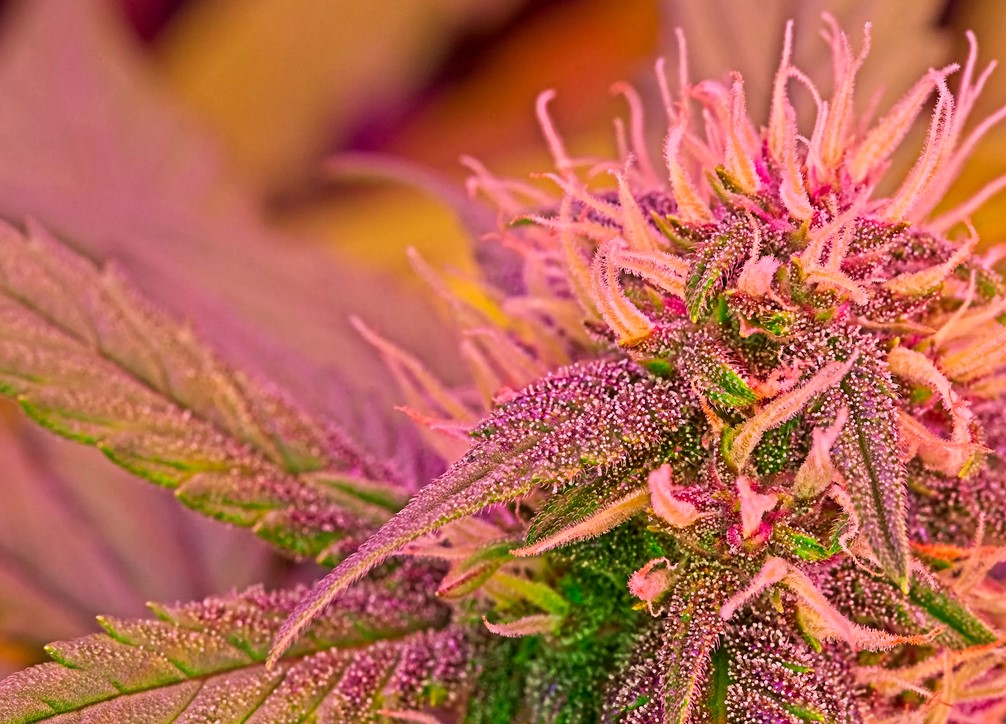 The color of cannabis in its growing medium is also determined by the pH and nutrient levels in the soil. If you’re using a hydroponics system, keep the pH level between 5.5 and 6.5. The ideal range for dirt is 6.0 to 6.8 if the pH level is kept below 7 (neutral).

However, if the pH level drops below 5.5, it’s more probable that your marijuana will be red. If the pH rises above 7.0, blue hues may appear in your cannabis. When it comes to nutrients, lower the amounts of phosphorus supplied to your plants if you want red weed. However ensure that you don’t go too far and develop a phosphorus shortage!

We suggest using other methods to make leaves turn yellow, as reducing a plant’s nitrogen intake is not effective.

The genome (the set of genes and chromosomes) of a marijuana plant determines its distinct characteristics. The genome is passed down through DNA and derives from the offspring of parents.

With several thousand potential combinations, there are hundreds of genetic characteristics to explore in order to create new strains of marijuana. While some develop more secondary pigments, others will never show the incredible range of colors that this plant is capable of.

However, the guarantee that the strain will provide a purple hue is due to the pH, nutrient, and environmental factors. This is because strains with ‘orange’ in their name usually relate to connect back to plant’s hairs’ colors , while ‘white’ strains relate moreso towards the abundance of trichomes on the plant.

Final Thoughts on the Colors of Cannabis

In general, the only reason to consume colorful cannabis is for aesthetic reasons. It’s a mistake to assume that color corresponds to potency. The cannabinoid content of the strain determines whether your purple marijuana is stronger than other strains.

If you want to pay extra for the most colorful marijuana strain available, it’s only because you like the way it looks. Weed with a high amount of anthocyanins may have more antioxidant activity. This belief is based on a tiny sampling of research, however.