Shatter is a hard, translucent concentrate that has the texture and appearance of glass. Check out our shatter article to learn more.

Shatter, sometimes known as shatter wax, shatter weed, or marijuana shatter, is one of the most beautiful and distinctive sorts of cannabis product available right now. Shatter exploded onto the market in the early 2010s, providing consumers with a powerful new way to consume their favorite strains of cannabis. Looking to try shatter? Check out this Breaking Dab – Shatter.

What exactly is shatter, and how does it work? Shatter is a type of cannabis extract created by extracting the plant’s essential oil, which contains cannabinoids, terpenes, and other chemical compounds present in the cannabis plant. The term “shatter” refers to a specific type of translucent cannabis concentrate that breaks and shards like glass.

After the necessary cannabinoids, terpenes, and other required compounds have been removed with shatter, the concentrate is poured onto slabs similar to cookie sheets and placed in a vacuum oven. The vacuum oven aids in purging by pulling residual ethanol while also keeping the extract intact: a clear, glass-like texture that shatters like crème brûlée when cracked with a spoon.

What Is The Consistency of Shatter?

The shatter’s consistency is based on its ratio of terpenes. Terpenes are sticky in texture at room temperature, and when a lot of terps are present, the shatter becomes more snap and pull, resulting in breakage rather than shattering like a glass shard. Furthermore, high amounts of THCA might cause “sugaring,” or crystalization.

Shatter, according to some users, is the most straightforward concentrate to work with since to its softer texture and flexibility. You may either use a dab tool to scrape off parts or your fingertips. The dab tool, also known as a dabber, is designed specifically for vaporizing concentrates. The device prevents any unwanted burns while loading vaporizers by making it easier to measure your dose – but I’ll get into that later.

What Is Shatter CBD? 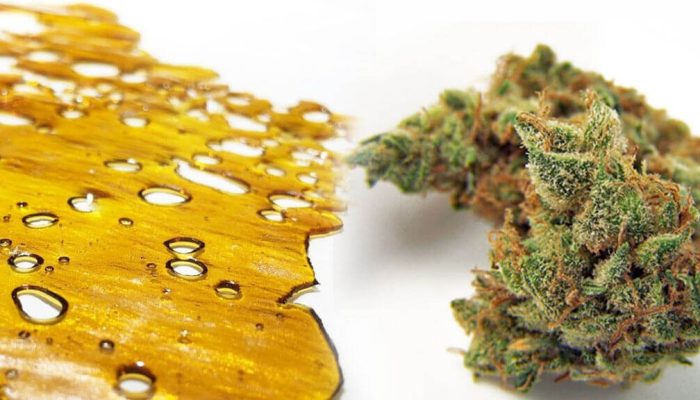 If you go online to look up various shatter meanings, you may believe that all shatter concentrates contain a lot of THC. Marijuana shatter is well-known for its high THC levels and the ability to put even the most experienced cannabis users on their butt, but not all shatter has to be high in THC. Some manufacturers of cannabis concentrates have started producing CBD shatter as well.

How to Use Shatter

Shatter is a type of marijuana extract, but it differs from other extracts in that it is most often vaporized or “dabbed” from an e-cigarette or a specialized water pipe called a dab rig by clients. Marijuana extracts like shatter are a quick, efficient, smoke-free method to consume cannabis with a potency ranging between 50 and 90 percent CBD.

You’ll need a vape pen that is designed to work with cannabis extracts like wax or shatter to utilize them. These vapes have a rapid-heating atomizer (the vape’s heating element) that warms up rapidly, allowing your shatter to reach its vaporization temperature.

To vaporize shatter, simply mix the concentrate with your vape’s heating chamber as you would other cannabis extracts. As the atomizer heats up, your shatter will melt quickly and transform to vapor, which you will breathe from the device’s mouthpiece.

Another method of utilizing marijuana shatter is known as dabbing. When dabbing, tiny pieces of shatter are “dabbed” on a hot surface, such as a hot titanium or ceramic nail or quartz bucket. When the hot surface comes into contact with the shatter, it will swiftly evaporate. You’ll breathe in vapor through the water chamber of your dab rig and into your lungs while dipping your shatter onto the heated surface.

When it comes to most real-world situations, shatter and other cannabis extracts are extremely similar. They’re ingested in much the same way and have a comparable potency range. The primary distinctions between cannabis extract types are appearance-related.

Shatter is semi-transparent to some extent, with an amber or golden color and a transparent quality. The reason that shatter concentrate is partially transparent is because of the molecules in cannabis oil extracted. In shatter, these molecules are arranged in straight rows on top of one another, just as they are in cannabis oil extracted. This molecular alignment allows light to go through the marijuana extract and gives it its glass-like features.

The extraction process is greatly impacted by fermentation, heat, dampness, and a high terpene content.

The particles in the mixture are disturbed during the addition of other materials, such as shatter and sap, which is why they become hazy. The translucency of shatter is due to its lack of agitation.

The translucent aspect of shatter is due to the presence of THC. That’s why it’s not recommended that you consume cannabis oil unless you know what you’re doing. The pictures below illustrate how disrupted molecules in cannabis oil form strange structures that are more opaque and let less light through during processing. This is why shatter vs wax is such a crucial distinction; instead of transparent concentrates known as shatter, you get opaqueswax or similar cannabis concentrates when the oil is agitated.

What exactly is shatter, and why is it called that? When compared to other extracts, shatter is quite challenging. When pressure is applied to it, it frequently fractures and… Shatters when broken. On a chilly day, shatter might crack violently, scattering glass shards in all directions. In that respect, shattering has a lot in common with breaking glass. When shatter is viewed in a slab form, this becomes even more apparent. 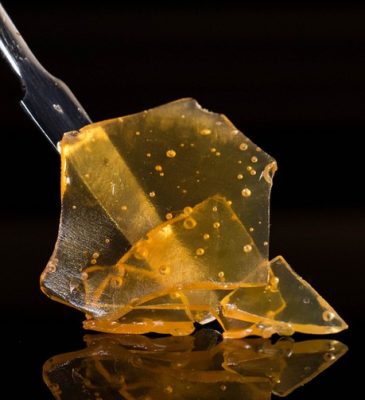 Dabbing shatter has several advantages, including the fact that it is one of the quickest methods to introduce cannabinoids into your system. Because cannabis extracts have a higher concentration, users are now able to take a “less is more” approach when taking marijuana.

Dabbing shatter, which promises to liberate consumers from the need to smoke enormous quantities of burning plant material in order to get their desired effect, is also excellent news. Consumers can dab only once or twice instead of smoking entire joints and breathing only vapor – not smoke – to acquire their THC and other cannabinoids.

Shatter is also more durable due to its chemical composition, as it decomposes more slowly than wax and other comparable extracts. Some individuals, on the other hand, find the solid texture of shatter difficult to break up and distribute into separate applications. Warm your dab a little before removing a dab of shatter with your dabber.

How Is Shatter Different From Other Concentrates?

The many types of cannabis extracts available today are, in terms of functionality, very similar. The numerous qualities and benefits of cannabis concentrates like shatter, wax, and oil are comparable.

There are a variety of reasons for the aesthetic variations. Some concentrates may be shaken, whipped, or stirred to disorient the molecules in the extract and introduce air after extraction. When cannabis oils are disturbed by agitation, they assume strange forms with air pockets forming as a result. Cannabis extracts that have been intentionally agitated during processing acquire a honeycomb appearance like crumble.

How to Store Shatter

Shatter, unlike cannabis flower, is particular about how it should be stored. Shatter may lose some of its potency and flavor if kept incorrectly. Always store shatter in a sealed, airtight container in a cold, dark place. To maintain consistency in texture, taste, and strength for as long as possible by keeping it away from heat or low temperatures, oxygen exposure, heat extremes, direct sunshine ,and ultraviolet lightMost importantly, shatter must be kept cold at all times. The cannabinoids and terpenes in shatter are activated when it is heated, which should only happen during usage.

Shatter, like other edibles, is a psychoactive drug that promises to deliver the same feeling as eating candy. Despite its sweet appearance, consuming shatter is unlikely to provide any of the desired effects. Shatter’s cannabinoids and terpenes are activated by heat. Decarboxylation is the process of turning chemicals into their active states through heating.

Are There Any Side Effects to Using Shatter?

Because of its strength and high amounts of THC, persons interested in using shatter or other concentrates should be careful regarding any potential negative effects. THC has a variety of medical and therapeutic uses. Excess consumption, on the other hand, can induce severe anxiety and paranoia. It’s important to note that shatter is considerably more powerful than traditional marijuana flower (such as what you’d get from smoking a joint), so it might be frightening for people unfamiliar with cannabis or who are sensitive to its side effects. In fact, Shatter was the first concentrate produced by MÜV in Florida.