If you’d rather use an alternative ingestion strategy than smoking or vaping to reap the benefits of cannabis, consider trying weed tea. Drinking weed tea will provide you with the same long-lasting effect as cannabis edibles, but without the extra calories.

The Effects of Cannabis Tea 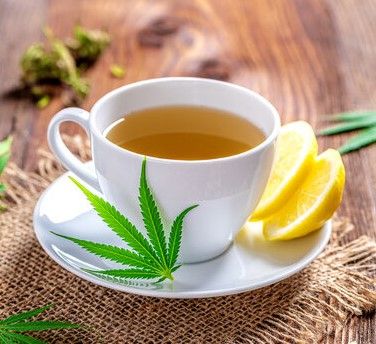 Cannabis tea, like edibles, must pass through your digestive system before being carried to the blood. Then, it is broken down in the liver. Cannabis tea will take effect in 30-90 minutes, depending on the cannabis strain, whether or not you have eaten recently, and your personal endocannabinoid system.

Because the drug’s impact is gradual to manifest, you may tempted to drink more tea. Don’t be in a rush; wait two hours before drinking another cup. For the most part, weed tea will have an influence on you for 7-8 hours.

Will Cannabis Tea Get Me High?

Making a marijuana-infused tea that delivers the therapeutic and intoxicating effects of cannabis isn’t as simple as you’d think. Because of decarboxylation and solubility issues, THC in the plant may be difficult to come by, but don’t worry: Once you learn a few basic principles, it’s plain sailing from there!

During decarboxylation, the non-intoxicating component THCA is transformed to THC, which activates different therapeutic and intoxicating effects (for more on THCA’s medicinal qualities, see here). When cannabis is smoked or vaped, heat causes decarboxylation without any additional effort on our part. The procedure of decarboxylation happens naturally when cannabis is cooked with butter or oils, or when hash or kief are added to a favorite dish and then heated over low heat on the stove.

If you decide to decarboxylate your cannabis before adding it to the tea, keep in mind that the appropriate time and temperature for decarboxylation may vary based on the following conditions:

How long does weed tea take to kick in?

It takes longer to digest edibles, which means you’ll need more time than smoking cannabis. It has to travel through your stomach and liver after being digested, as opposed to taking a few minutes via your lungs when you smoke cannabis. You may want to wait an hour or two before you start feeling the effects.

Start with a small amount and go slow when drinking marijuana tea or consuming edibles in general. Drink a cup and wait; you may always make another if you don’t sense anything.

Cannabis tea with rose and chamomile

Dosage: The amount of cannabis oil you add is entirely up to you. However, we suggest 2 teaspoons in this recipe because it depends on the strength of your cannabis. You may always increase or decrease the amount as needed. 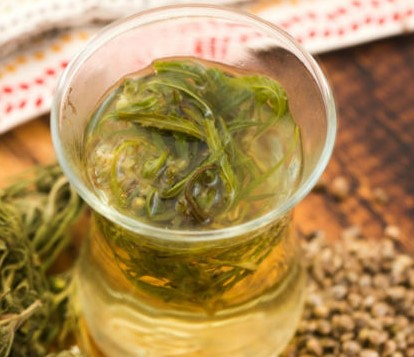 You may make a cozy cup of cannabis tea with just a few ingredients. You’ll need the following:

Place your cannabis in a suitable container, such as a stainless steel can or bowl. Separate all of the seeds and stems before chopping or grinding it. Bring the water to a boil on the stovetop and then add coconut oil or butter, stirring constantly until fully melted.

Add the teabag, cover the pot with a lid and simmer for 7-10 minutes. Stir every minute or so. Lowering the temperature will aid in the preservation of the plant’s medicinal qualities.

Sweeten to taste, if desired, with honey or lemon juice. To cover the distinct marijuana flavor of the brew, add a cinnamon stick or a spring of peppermint to the hot tea.

If you have cannabis-infused butter, oil, or honey, or a cannabis tincture, you can make weed tea even more simply. Simply steep the cannabis extract in hot water with a teabag of your choice and blend thoroughly.

Reminisce about those cannabis stems you separated in the beginning? You may utilize them to make weed stem tea and squeeze out a few more uses from your marijuana.

For thousands of years, marijuana has been connected with pain alleviation. The cannabinoids in marijuana bind to the pain receptors in the central nervous system (CNS) and dampen pain signals.

Cannabis, in contrast to opiates such as morphine or codeine, is not habit-forming and causes no withdrawal symptoms in patients. Cannabis-infused tea is absorbed throughout the body via the digestive system, resulting in more sustained and effective effects than smoking.

Cannabinoids have been found in several studies to reduce inflammation caused by autoimmune disorders such as multiple sclerosis, inflammatory bowel disease, and lupus. It also helps to regulate the body’s immune system, making it less likely to attack itself.

Cannabis has been found to have a neuroprotective effect and appears to slow down or perhaps even stop the beta-amyloid protein formations associated with dementia and Alzheimer’s disease, according to studies of the drug’s impact on the brain.

The gastrointestinal system may be affected by a variety of chronic diseases. Cannabis has been proven to relieve cramping, stomach ache, diarrhea, nausea, constipation, and acid reflux in patients with these conditions.

Drinking cannabis tea, on the other hand, can assist with mood stabilization and help to alleviate emotional symptoms associated with chronic illnesses such as depression and anxiety, according to studies.