Fibromyalgia, a severe and complicated neurological condition, has astonished the medical community with its often perplexing yet debilitating symptoms. Doctors didn’t even know if fibromyalgia existed until a decade ago. Has nature perhaps provided a real cure for this frequently misunderstood illness?

How Does Cannabis Treat Fibromyalgia and Give Patients Relief?

What Exactly is Fibromyalgia? 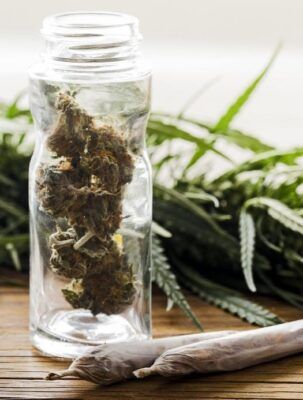 The first step in treating fibromyalgia is to recognize the signs and comprehend how this illness may overwhelm those who suffer from it. This disease commonly causes chronic pain, severe tiredness, joint stiffness, sleeplessness, throbbing headaches, digestive difficulties, and cognitive disturbances. It isn’t as uncommon as you would think; according to statistics published by the National Fibromyalgia Association (NFA), over 5 million Americans today have fibromyalgia, with many of these people being women.

What Could Be the Cause of This Debilitating Disorder?

Although the source of fibromyalgia is a point of contention, one researcher, Dr. Ethan Russo, conducted extensive research on the subject and offered a hypothesis-that Clinical Endocannabinoid Deficiency (CECD) might be to blame.

The ECS’s primary aim and purpose is to keep your bodily functions in balance. It manages a lot of the communication between your body’s networks, such as the brain and immune cells, among others. When this system is not working properly, it’s reasonable to anticipate a set of associated symptoms, similar to those connected with fibromyalgia.

The National Academies Press (NAP) released a comprehensive study of the health impacts of cannabis, which includes therapeutic applications, in 2017. According to the research, there is a lot of evidence that cannabis alleviates chronic pain in adults.

A few investigations have concentrated on the suffering associated with fibromyalgia alone. In a 2007 experiment comparing nabilone, a chemical cannabinoid, to a placebo in 40 persons with fibromyalgia, significant pain relief was discovered. In 2011, Trusted Source interviewed 28 people who used cannabis for fibromyalgia and asked them to rate the advantages it offered for each symptom.

Deep tiredness, global malaise, and paresthesia were the most frequent symptoms reported by patients. Cannabis was found to help relieve severe pain in approximately 43% of them and moderate pain in another 43%. A 2018 Trusted Source study published concluded that four kinds of cannabis with varying THC and CBD content had similar effectiveness.

The remaining three types of cannabis were placebos that did not include THC or CBD. According to the research, individuals who received the two THC-rich therapies had a better pain tolerance than those who received the placebo, whereas people who took a product that included CBD but no THC reported no significant pain relief. Additional study is needed to see whether medical cannabis truly works as an analgesic for fibromyalgia-related pain.

Is Medical Cannabis and Effective Treatment for Fibromyalgia?

Although fibromyalgia is a complex and difficult-to-treat condition, many people are unaware that conventional pain medications do not treat all of the symptoms. Because of this, few patients have found relief from traditional pain medicines for their pain, restlessness, tiredness, and other symptoms.

When some of those plagued began to search for alternative treatments, the link between medical marijuana and fibromyalgia was established. Because cannabis is still largely prohibited and banned in a number of states, as well as just a few years ago being considered a useless recreational drug, this discovery generated a wide range of feelings among these people. Recent legislative changes appear to be more hopeful for fibromyalgia patients who use cannabis to help them, but why cannabis appears to work for so many people is still a mystery, just as much of the information surrounding fibromyalgia.

However, many of these persons agree that marijuana appears to alleviate their symptoms and suffering. In fact, according to a survey conducted by the National Pain Foundation in 2014, nearly 30% of 1,300 patients admitted to using medical cannabis rather than traditional pharmaceuticals, representing a large percentage considering pot’s legal status in the world. 62% said that marijuana was quite helpful for them, while another 33 percent said it helped somewhat.

Only 8-10% of respondents felt that the traditional medicines given to people with fibromyalgia were quite efficient, with 60-68% stating that they did not assist at all, emphasizing the belief that cannabis appears to be the main choice for reducing fibromyalgia pain and fogginess.

Patients with fibromyalgia have a wide range of choices for cannabis intake because there are so many possibilities. They may select from a variety of cannabis strains that best fit their demands, as well as edibles, vaporizing, oil extracts, and traditional cannabis flower.

In the near term, there is some evidence that cannabis-based treatments can assist people with fibromyalgia sleep better.

In the aforementioned 2011 study, Trusted Source, 81 percent of those who used cannabis to alleviate fibromyalgia symptoms reported that it helped them a great deal with sleep problems.

Finally, researchers investigated the impacts of nabilone, a manufactured medication with characteristics comparable to cannabis, in 2010. According to the researchers, nabilone helped people with fibromyalgia sleep better.

Medical cannabis for other fibromyalgia symptoms

The effectiveness of cannabis in treating additional symptoms associated with fibromyalgia has only been investigated to a limited extent. According to the Handbook of Cannabis and Related Pathologies, the majority of the evidence on cannabis’ efficacy in reducing muscular stiffness, depression, anxiety, and headaches related to fibromyalgia comes from surveys and observational study. It is critical that further clinical trials be completed.

According to the evidence, medical cannabis may help with pain and sleeplessness problems linked to fibromyalgia. If you’re considering using medicinal cannabis to treat fibromyalgia, talk to your doctor first. Cannabis might cause interactions between different medicines you’re currently taking.

Your doctor can assist you in determining the advantages and dangers of using marijuana for fibromyalgia. They may also tell you whether it is presently lawful in your area. Don’t use cannabis if you’re pregnant or nursing. THC may pass through the placenta and milk to your baby, raising concerns about fetuses and newborns.

Fibromyalgia is a chronic condition characterized by persistent, widespread pain that affects the muscles and joints. The following are some of the most common symptoms: aches and pains, nausea, and headaches. Marijuana’s active components have been found to lessen pain and alleviate certain symptoms in specific people. However, only a few studies have evaluated marijuana or its extracts as a distinct treatment for fibromyalgia, and existing evidence is conflicting.

Cannabis has “some potential value” in treating fibromyalgia symptoms, according to a study published in the Journal of Pain and Symptom Management.

People who were “consuming cannabis” rather than focusing on a pharmaceutical extract or a specific chemical were the focus of the study, according to the press release.

However, a 2016 review of studies found that there was insufficient evidence to suggest that cannabis-based therapies are useful in treating symptoms in people with rheumatic diseases like fibromyalgia.

In 2018, an Australian study Trusted Source 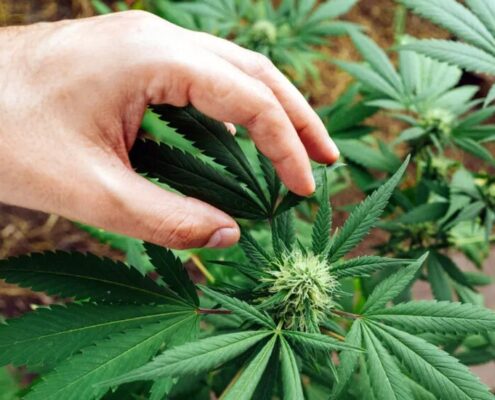 There was little indication that marijuana use relieved pain or the need for opioid medications in patients suffering from a variety of ailments. This research, like others, focused on recreational users rather than medical patients.

Women are approximately 90 percent of individuals who suffer from fibromyalgia. Marijuana, on the other hand, has been demonstrated in at least one research to aid men with pain more than women.

Cannabis contains chemicals that have been found to help with Chronic Pain, Nausea, Muscular Spasms, and Nerve Inflammation as a result of Multiple Sclerosis. Cannabis may be beneficial in the treatment of fibromyalgia-related symptoms such Furthermore, cannabinoids have shown promise in the treatment

Cannabis can help people with fibromyalgia feel better. It includes chemicals that may help with some of the symptoms. THC and CBD have received the most attention due to their chemical make-up. The acronym THC stands for delta-8 tetrahydrocannabinol, which is one of the cannabinoids found in cannabis. THC works similarly to naturally occurring cannabinoid chemicals by stimulating cannabinoid receptors in the brain and producing pleasure. This activates the brain’s pleasure system, reducing pain levels .

THC, according to at least one study, might help cure headaches. It also aids in the memory and coordination of the brain.

On the one hand, CBD does not provide you with the same euphoric or psychoacoustic high as THC and does not bind to cannabinoid receptors. In other words, it doesn’t give you the same degree of enjoyment and euphoria that THC does.

When is marijuana suitable?

Marijuana is used to treat a variety of illnesses, although only a few have been proven to be beneficial. Marijuana’s effectiveness in treating chronic pain, including nerve discomfort and muscular spasms, has been backed by science.

According to the National Institute on Drug Abuse, researchers are examining whether marijuana cannabinoids might help with the following:

Cannabis extracts have been proven to hinder the growth of cancer cells in one type of brain tumor in mice. Cancer cells were destroyed by a combination of CBD and THC extracts in mice undergoing radiation therapy. These applications require further study.

People who are considering using cannabis as a treatment for fibromyalgia pain symptoms should check their state’s laws on cannabis use.

Because the FDA has not given its blessing to marijuana or its related goods, customers should use caution when purchasing and utilizing a product because there are no quality or content standards in place.

Marijuana is grown as a plant. It isn’t produced in a laboratory by hand. As a result, the quantities of potentially therapeutic chemicals will vary from one crop to the next. The effectiveness of symptom alleviation may be linked to this as well.

Because marijuana may not be safe and effective for everyone, individuals should consult with their doctor before using any alternative or complementary therapy, such as cannabis. Marijuana’s chemicals, for example, might interact with other medicines.

Marijuana has been linked to both mold and fungus, which can damage the lungs and general health. Manufacturers and vendors may use other medicines in conjunction with cannabis. Exposures are possible due on account of marijuana’s presence. A healthcare professional may be able to recommend a trustworthy source or product as a result of the presence of marijuana.thc