The end result of this match is the delicious cocktail-like offspring, Mimosa, which is named for its resemblance to a mimosa. It’s no surprise that this combination generated the delectable mix due to its delicious Clementine and Purple Punch parents. The strain produces a cheerful and energetic high, but it also causes cravings, so have some food on hand. 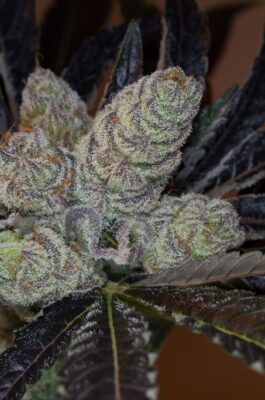 When you hear the word Mimosa, perhaps you imagine yourself sipping a glass of champagne and orange juice on the patio beside the pool. However, if you have been paying attention to up-and-coming cannabis strains like Mimosa from Symbiotic Genetics, you are probably thinking about a joint rather than a cocktail.

What Is the Mimosa Strain?

The high of a Mimosa (sometimes known as Purple Mimosa) is euphoric, uplifting, and happy. It’s the result of a sativa-dominant hybrid (70 percent sativa: 30 percent indica) strain named Clementine breeding with an indica called Purple Punch.

Mimosa is a popular marijuana strain, having debuted on the cannabis market in 2017. Mimosa smokers appreciate the cerebral high and uplifting effects of this plant.

Cannaseurs have dubbed this one a “wake and bake” strain because of its energizing properties. As a result, it’s best used during the day and you’re better off avoiding this strain late at night if you plan on falling asleep soon.

Mimosa, according to users, makes you feel happy, uplifted, and energized after the initial euphoric high fades slowly.

Mimosa has a low CBD content of 0.05% and a very high THC concentration, which may reach 30%.

Beginners should start with a small amount to see how they react to Mimosa’s effects. If you’re a lightweight drinker, you wouldn’t down a dozen Mimosa cocktails; likewise, overindulging on Mimosa marijuana isn’t a good idea for seasoned cannabis smokers. Even experienced high-THC users would do well to take it easy with this one.

The outstanding scent and taste of Mimosa, in addition to its delightful citrusy fragrance and flavor, are additional reasons for its widespread appeal among cannabis consumers.

The good news is that Mimosa has all of the lovely citrusy orange scents from Clementine, its parent strain. These are complemented with a sour note that gives it a robust sweet and sour aroma.

Other aromas present in Mimosa include earthy scents and fresh floral fragrances.

Mimosa’s scent indicates how good this strain smells to a potential user. The sweet and sour tastes dominate, and this marijuana strain is exquisite for the taste buds.

A mature Mimosa plant features a dense covering of large cone-shaped buds with a thick layer of milky-white trichomes. The heavily frosted look of the Mimosa plant is complemented by hints of purple from its parent strain Purple Punch.

The bright orange stamens that bloom near the leaves and wintergreen calyces make a Mimosa plant a striking sight. 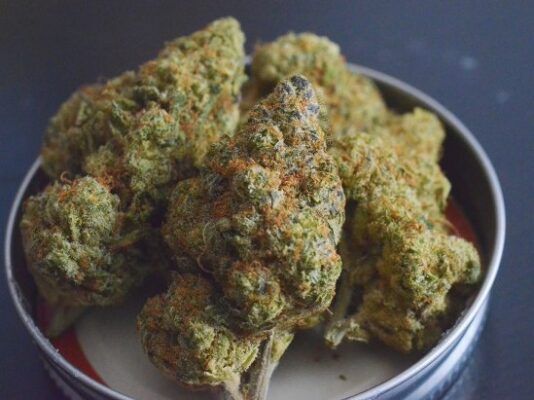 Mimosa’s delightful citrusy orange taste is due to its terpene profile (discussed in greater depth in Mimosa’s Medical Benefits section below).

There are a variety of methods for Mimosa’s terpenes to reach their full potential and, as a result, maximize the plant’s tastes. The soil quality you choose has an impact on how well the Mimosa plant grows.

We suggest using a complex, healthy soil medium high in essential minerals to nurture the plant throughout its many growth stages. You may buy a super soil mix in a bag for around twenty to thirty dollars or try your hand at making your own.

Alternatively, give the Mimosa plant some of the critical elements it require throughout its development. In the vegetative stage, you may use higher than average nitrogen levels. To aid increase terpene content, follow this with high phosphorus and potassium levels in the blooming stage.

After picking, you may also improve Mimosa’s citrusy orange flavor by drying the buds. To cure the buds, begin by hanging or placing them on a drying rack for seven to ten days to dry them.

Remove the buds from the drying tube and place them in an airtight container, such as a wide-mouthed Mason jar, once they are completely dry. Before storing them in a cool, dry location like a closet, seal the lid firmly.

Week 6 is when the buds will be ready to smoke, and you should open the lids three times a day for five to ten minutes during this period. Any moisture should evaporate, allowing the buds to breathe. After the first week, you’ll only have to perform this a few times each month to avoid mold forming.

The Mimosa buds will be fully cured after two or three weeks.

You may store these buds for 4-6 weeks if you don’t mind waiting a few weeks longer for better results.

Mimosa, like other hibiscus species and hybrids, produces a white bloom that lasts for about three weeks before fading. It takes around nine weeks to bloom indoors and harvest begins in mid-to-late October.

Medical Benefits of the Mimosa Strain

Mimosa has several medicinal features as a result of its sativa-dominant genetics. The following terpenes may be found in Mimosa:

Both limonene and linalool have been shown to improve mood. Beta-caryophyllene, on the other hand, is thought to be a good stress reliever. As a result, it’s no surprise that Mimosa’s effects include lowering stress levels and treating depression.

Users of the Mimosa strain claim that it is a powerful pain reliever that can help with headaches, joint and muscular discomfort.

Users of Chronic Fatigue Syndrome report that Mimosa’s energizing effects provide them with a much-needed energy boost to get through a busy day. Others claim that while Mimosa isn’t effective at reducing nausea, it does make people feel hungry, making it an efficient appetite stimulant for some.

Possible Side Effects of the Mimosa Strain

The most common negative effects of smoking Mimosa weed are dry mouth and eyes. If you have a low THC tolerance or overindulge, you may feel anxiousness, dizziness, or paranoia.

The crash that occurs later in the day after the initial euphoric high and stimulating buzz has worn off is another negative impact of smoking Mimosa weed.

Final Thoughts on the Mimosa Strain

Mimosa’s popularity is skyrocketing, and there’s no doubt why. Smoking Mimosa cannabis is a pleasurable experience for both recreational and medicinal cannabis users since to its invigorating and uplifting qualities.

Mimosa is a potent strain with a high THC content, making it more suited to an experienced rather than a novice cannabis user.