The P-51 strain‘s high is a stress-relieving, relaxing experience that can immobilize people who overdo it. Its strong effects are also why it was dubbed the “Tranquilizer Dart.” Nonetheless, because it is a excellent bedtime companion, it remains a favorite among Indica fans.

Looking to try something new? Check out this Cherry Kush marijuana strain. 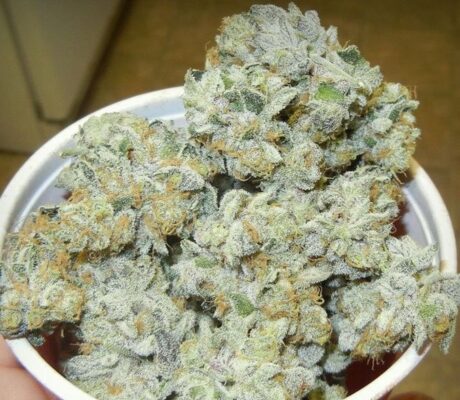 The Tahoe OG x Blackberry strain was created by Clint Pipkin, who crossed Tahoe OG with Blackberry. The latter influenced P-51’s soothing euphoria and potent yields. However, it is the former that truly showcased its offspring’s top nighttime capabilities, such as producing a powerful body high.

The high produced by P-51 is a strong one. It may be quite daunting at times, especially when used beyond suggested parameters. Even for novices, it provides a pleasant high in moderation.

Its initial symptoms include a burst of euphoria that spreads throughout the mind. It makes one feel good on the inside as it cleanses distracting ideas. The behavioral modification is also rapid. As smiles spread from ear to ear, laughter pours out of the mouth in a waterfall of giggles.

It’s a good idea to have food on hand ahead of time. This is due to the fact that as the softly stimulating buzz spreads from the temples down to the stomach, it also revitalizes it. It should come as no surprise, therefore, that users soon become hungry. Having meals around will not only save time by going to the kitchen; it will also enable you to prepare for the next Indica high.

After a couple of hours, the once mild sensation begins to grow stronger. It relaxes the muscles deeply until the body feels extremely heavy. As the effects continue, one’s eyelids start to close until users succumb to sleep.

P-51 is an effective and potent aroma that has the ability to rapidly energize and invigorate. It’s best utilized as a precursor to a rich dinner or as a relaxing cap off due to its strong impact.

The scent of a P-51 is quite complex. It combines pungent overtones of moist soil with distinct chemical undertones of diesel fuel. When broken down or combusted, it releases a spicy fragrance with an herbal undertone.

P-51 features a robust diesel flavor when drawn in, which tempts users to take another puff. The subtle sourness transforms into an herbal flavor with earthy undertones at the end of the exhale. A spicy aftertaste lingers in your mouth on the exhale. 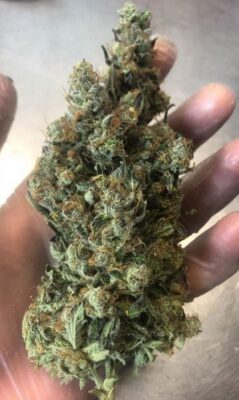 Regardless of the type, marijuana users are likely to get dry eyes or cottonmouth. Cottonmouth and dry eyes are two fairly typical marijuana side effects. Regardless, all of them are minor and might be quickly addressed by drinking lots of water throughout the day.

Dizziness and paranoia are possible effects of smoking P-51, although they are rare. This is especially true for individuals who exceed their personal tolerance or who are susceptible to the condition. While most people only experience a headache, it is still critical to limit consumption of the bud.

The P-51, like the Bali, has a wonderful soothing high that is frequently utilized to alleviate day-to-day stress. It can also be used as a source of comfort for patients suffering from chronic pain as a result of sickness or tiredness.

It has a muscle-relaxing effect, relieving ailments in its path. P-51 also prevents stomach turbulence, which can frequently result in vomiting. As a result, cancer patients may use the strain to reduce chemotherapy’s nauseating side effects.

The same psychoactive ingredient has a relaxing impact on the brain. Its euphoric happiness soothes nervous dread while boosting spirits, for example. As a result, it is an excellent stress reliever and anti-depressant that can help with symptoms of mental health problems such as sadness, anxiety, and PTSD.

The P-51 is a small plant. Its stalks are short and thick, with a lot of branching. It also has an impressive structure that can handle a range of unpredictable growth conditions, such as changing temperatures.

Pruning the compact plant is necessary when cultivating it indoors. Not only will this increase airflow, it will also let more light circulate in the lower nodes. Apart from that, removing dying or dead branches or leaves will distribute nutrients to healthier parts to create bigger colas and produce more budding sites.

P-51 has an indoor flowering period of 7 to 9 weeks. Once ready for harvest, it yields at between 10 to 12 ounces of buds per square meter. However, under the Sea of Green method and the expert care of a seasoned grower, it can produce much more.

In the northern hemisphere, P-51 blossoms from the last week of September to the middle of October. A vigorous producer, each plant is expected to produce at least 12 ounces of buds.

Have you ever smoked or grown your own P-51? Please let me know what you think about this marijuana strain in the comments below.