Cannabis has been around for a long time—close to 30 million years according to some studies. For most of this time, it expanded across Eurasia and was subjected to environmental stresses in different locations, including arid deserts, broad-leaved forests and steppe plains. Along the way, various parasites and mutualists (such as insects, mites, fungi and bacteria) moved with cannabis. Some species have adapted so intimately that they can only feed on cannabis; examples include the Cannabis Aphid (Phorodon cannabis) or Hemp Russet Mite (Aculops cannabicola). Various pests, such as the various species of fungal Powdery Mildews or viruses like the Beet Curly Top virus and infamous Hop Latent Viroid, have a more extensive host range and can spread from nearby plants that host them to cannabis crops. In the last 10 millennia or so, human cultivation has exposed this plant to many new environments with both advantageous factors, like beneficial microbes, and disadvantageous threats, like generalist herbivores.

Flowers that were naturally small and sparsely populated by trichomes containing cannabinoids and other secondary metabolites such as esters, terpenes, and phenols exploded in size and trichome density with chemical variants when cultivated.

Pest management for cannabis plants can be difficult to understand, but it is important to remember that pests are naturally occurring organisms. Cannabis plants have been cultivated over time and the population has adapted to survive in nature. However, this does not mean that they will be able to withstand the same level of pest pressure as desired by humans. Therefore, growers and those who enjoy cannabis must take measures to protect the plant and produce acceptable results in yield and potency.

Cannabis pests benefit from their parasitic connection at the expense of the host plant, which they frequently do by directly damaging tissues and acquiring resources. As a result, pests are frequently found near to the plant in the branches and leaves (phyllosphere) or root system (rhizosphere). Dozens of varied pest types exist, each requiring its own approach for prevention and treatment; however some of the most prevalent species have been extensively studied. The following are examples:

This 0.4 millimeter long mite, with a documented taste for more than 4,000 species of plants from dozens of families, is one hearty eater! This little glutton has been found all over the world and may be the most prolific herbivore due to its physiological smörgåsbord of genetic adaptations. These genes originally belonged to bacteria and fungi in some cases and allow the mite to resist plant as well as human chemistries that would normally disrupt it. To control this tiny menace at small or large scale, people often use predatory mites like Phytoseiulus persimilis. Although it cannot be used with insect and mite biocontrols, wettable sulfur is effective during a plant’s vegetative growth period but not the flowering period. It is important to note that the “spots” of the Two-Spotted Spider Mite are not always visible because they are intestinal pouches that can be obscured by red or green pigmentation on the body.

These russet mites, which focus on cannabis, measure .15 to .2 millimeters long. They have a worm-like shape and are mostly found on one or a few related plants. The Hemp Russet Mite is unique among russet mite species in that it produces large structures called galls by manipulating leaf development. This provides them with better shelter from the environment and predators like Amblyseius swirskii or Neoseiulus cucumeris, which are often used commercially. Most commonly, they are spread on the wind or through cuttings. 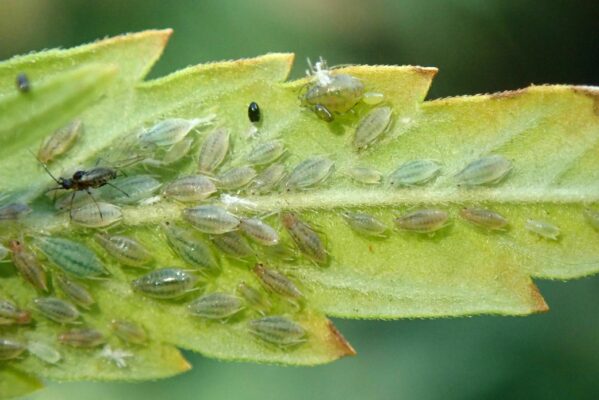 According to certain calculations, hops and cannabis diverged from one another approximately 30 million years ago, and the Cannabis Aphid has specialized on this plant to the exclusion of others, which is the most typical way for aphids to live. They eat plant sap called phloem, as other aphids do, and adults produce live-birthed clone-like babies that are born pregnant like other aphids.

Measuring in at around 2-3 millimeters, this light yellow or pale green creature has a long needle-like mouthpart and backward pointing antennae on its head. Near its abdomen are protruding structures called cornicles which secrete alarm compounds when the creature feels threatened. When colonies of these creatures become too dense, winged adults develop who fly off to lay eggs or reproduce clonally elsewhere. Quick detection of pests is important for efficient treatment; biocontrols like Green Lacewing larvae Chrysoperla carnea and the parasitoid wasps in the group Aphidius have had good success when deployed correctly. Botanical insecticidal agents like Pyrethrin or Azadirachtin are also highly effective against target and non-target insects alike, while still being safe to use on plants. 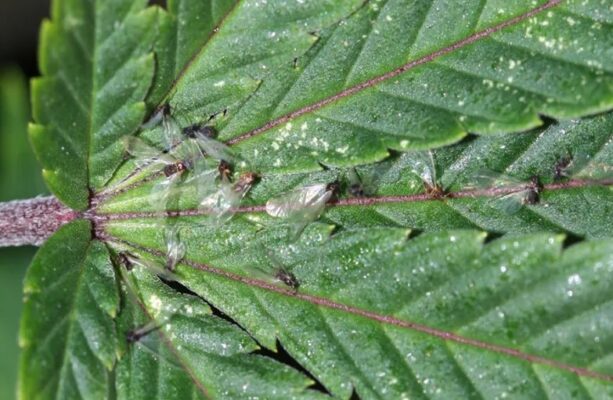 While most aphids have specialized lifestyles that focus on one or two plant species, the Rice Root Aphid is part of a smaller group that can sustain itself off many different types of plants. This includes both herbaceous plants like wild grasses in the spring and summer months, as well as woody trees such as almonds and other Prunus species during autumn and winter. Vexingly, they tend to congregate in the root system of plants, particularly cuttings, and frequently build up in number covertly as they consume plant sugars, eventually traveling up the stem and onto leaves after dozens have been generated and crowding occurs, making plant inspection more difficult. These aphids, with their bulbous body shape, abdominal cornicle structures, and back-facing antennae, are frequently confused for Fungus Gnats when they become adults and have wings, but their bulky form can be used to distinguish them from their daintier counterparts. The Rice Root Aphid is often a dark color, sometimes mottled with green or a reddish spot at the tip of the abdomen. Populations underground can be targeted with pathogenic fungi like Beauveria bassiana and both above and below-ground populations can be targeted with soft botanical chemistries like Azadirachtin which greatly reduces aphid defenses against Beauveria and similar pathogens. 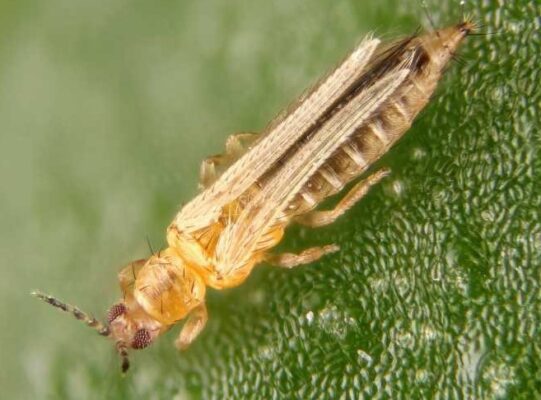 The Western Flower Thrips is the most studied of all 5,000+ thrips species in recent years. It’s a versatile generalist plant parasite that frequently occurs in different crops, resulting in black liquid spots of excrement with stippling or silvering damage demarcated by yellowish-cream colored larvae and adults. The thin, cigar-shaped yellowish-cream-colored body reaches approximately 2 millimeters in length and hangs down from the abdomen. At this point, they drop to the ground and become vulnerable to Steinernema feltiae nematodes, predatory mites like Hypoaspis miles, and other treatments as larvae mature. The major problem with thrips is their relentlessness in the ambient environment, which is exacerbated by desiccating plants or a rise in temperature as adults seek for suitable hosts.

The cannabis virome—all of the viruses known to link with marijuana—is largely understudied at present. Cannabis farmers are frequently unaware of these traditionally untreatable parasites and lack infrastructure support and biosecurity alternatives at all levels, from personal to commercial. Worryingly, viroids are often indistinguishable from viruses and similarly utilize replication as a way to spread. However, what sets them apart is that viroids do not contain any genes in their RNA structure. Overtime, this viroid will be recognized as cellular RNA and use plant processes to create more copies of itself–all while fragmenting into smaller pieces. If left unchecked, symptoms like stunted growth or low metabolite productions can develop in plants. To avoid such devastating outcomes, testing for HLVd should be done frequently and with precision.