When you first enter a dispensary, terminology such as “cannabis weights” may be unfamiliar. However, it is essential to learn the most common cannabis measurements since dispensaries generally price cannabis based on weight. In other words, the amount you purchase will affect the price you pay.

For those of us who are used to the imperial system, purchasing cannabis can be confusing. Cannabis flower and concentrates usually use metric units like grams or ounces, which are then weighed on a digital scale.

Let’s clear up any confusion about the measurements for cannabis flower and concentrates, and also share some tips on how to save money. 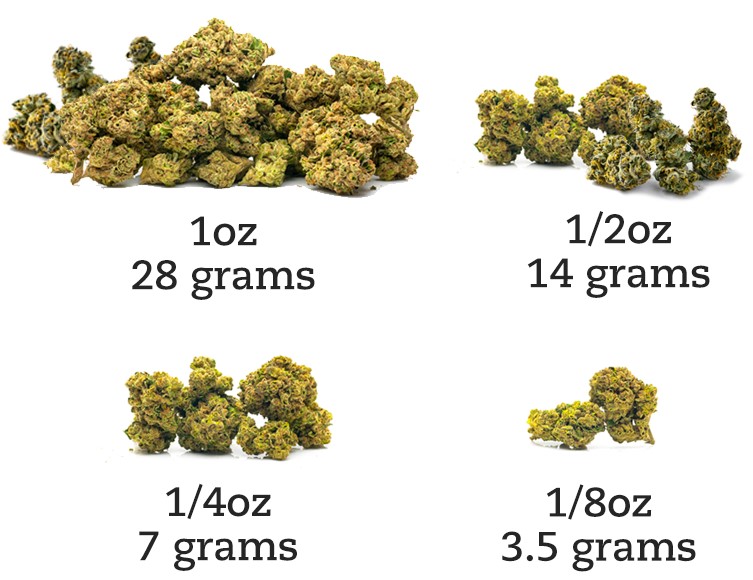 The smallest amount of cannabis flower typically sold at a dispensary is one gram. The next most popular weights are listed below, working our way up to an entire pound.

A gram is a unit of measurement that equals 1/1000th of a kilogram. It is the base unit in the metric system, and it’s also used to measure small amounts of cannabis. One gram is about the size (and weight) of a quarter, but it can sometimes be smaller or larger depending on how dense the weed is. To give you an idea of just how small one gram really is, imagine that it has approximately the same weight as a paperclip. If you know how to roll half-gram joints, then two should be easy for a full gram. A gram is one of the most popularly purchased because it’s affordable, but if you buy in larger quantities, you can get a discount depending on where you are.

Eighth of an Ounce

The next level on the cannabis measurement scale is an “eighth,” or an eighth of an ounce. An eighth of flower is equivalent to 3.5 grams of cannabis. For comparison, if you were to roll average-sized joints, you could expect seven to eight from an eighth of cannabis flower.

A quarter refers to a fourth of an ounce, or 7 grams, of cannabis. If rolled into a ball, it would be similar in size to an apple. A quarter is also the weight of a standard postcard or pair of tweezers and one could roll around 14 joints from that amount.

A half-ounce of cannabis is the next size up from a quarter, and it equals 14 grams–about the size of a large grapefruit. If you’re having trouble imagining it, think of an empty aluminum soda can or #2 pencil. With 28 half-gram joints per half ounce on average, this quantity should last quite awhile if you find a strain you really like.

The average consumer might purchase an ounce of cannabis at one time, which is equivalent to 28 grams. An ounce of flower looks similar in size to a small coconut. You could also compare the weight of an ounce of cannabis to a compact disc, five quarters, 10 pennies, or a single slice of whole-grain bread. Some people can roll as many as 90 joints from one ounce but on average you would be able to roll 56 half=gram joints. Remember that this number depends on how big you like your joint rolls

Although most states only permit consumers to buy or possess an ounce or two of cannabis at a time, that’s not the largest amount you’re allowed to have. A pound of weed is actually the biggest measurement on the common scale—it equals 16 ounces or 448 grams. You might have also heard of a quarter-pound (4 oz), which equals 113.4 grams. So, how much space does a pound take up? It’s about as big as a watermelon, but it would only weigh as much as an American football. Wondering how many joints you can roll with this massive amount of pot? Let’s just say…a lot!

If you reside in a state where purchases of this amount are legal, buying a pound can be an excellent way to stock up on your preferred strain. However, it’s essential to keep in mind that large quantities of cannabis can lose their quality if left uneaten for extended periods and not stored correctly. To avoid flower waste, refer to the list of tips for choosing cannabis weights at the end below. 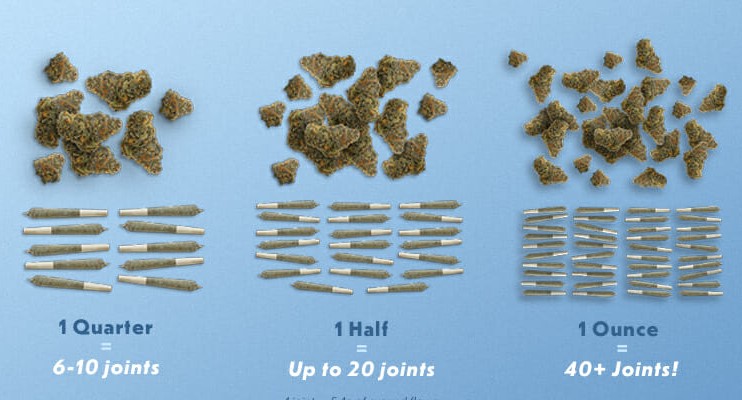 Pricing per Weight for Cannabis

The various weights of cannabis are defined, but the pricing for these levels varies drastically depending on quality. Many dispensaries offer different shelf levels that let consumers choose from cheaper or higher-quality products. For example, an eighth of a top-shelf strain may cost much more than an eighth of another strain on a lower tier.

Because cannabis had to be sold illegally for many years, a plethora of slang terms were created in order to differentiate between different weights. For example, have you ever questioned the size of a dime bag or dub sack? If so, read on! Below we define some of the most commonplace street lingo associated with measuring cannabis.

A dime bag is a small, inexpensive bag of cannabis that typically weighs one gram or costs $10. Depending on your source, the quantity of cannabis in a dimebag has varied over time.

The term “dub” or “dub sack” is commonly used to describe 2 grams or $20 worth of cannabis. Keep in mind though, that the weight of a dub could fluctuate anywhere from 1 gram to multiple grams, depending on where you are and who your source is.

The term ‘zip’ when referring to cannabis originates from the ziplock baggies that were popular for transferring an ounce of weed between people. If you ask most anyone for a zip of cannabis, they will know you are requesting 1 ounce! 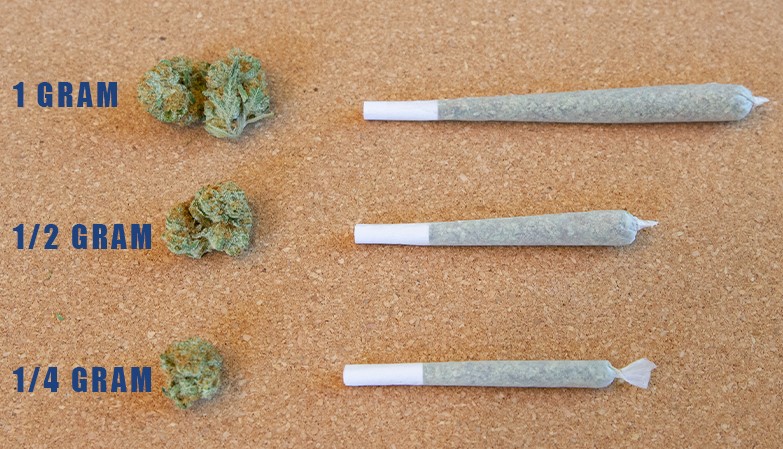 Here are some tips for choosing how much cannabis you should purchase:

Can You Weigh Weed Without a Scale?

Don’t try to wing it when measuring the amount of weed you have – use a scale! Trying to estimate by eye is not only ineffective, but if you’ve been working with large quantities for a while and think you can get close to an accurate measurement, you’re wrong. You might be able measure somewhat accurately by eye but oftentimes, people are off by several grams or ounces.

As anyone who has ever tried to weigh cannabis knows, scales are necessary for accuracy, no matter the amount. This includes weed by the gram as well as ounces or pounds.

Measuring by eye is often difficult because of the varying densities and structures of weed flower, shake, and trim. If you only look at bud size,you might be deceived; some long and airy sativa buds may appear large but actually weigh less than a dense indica popcorn bud that looks smaller. Also, some shakes can consist of finer particles or larger chunks of bud.

When you purchase cannabis from a licensed retailer, it typically comes in predetermined weights. However, if you try to estimate the weight yourself without using a scale, there is a risk that you might miscalculate.