The danger of our pets coming in to a stash has increased, as more states allow medical and recreational marijuana. Marijuana has grown in popularity, with new types of marijuana being developed, including tinctures, oils, and meals. Our cats enjoy catnip, which is similar to marijuana for a cat’s brain. However, if your cat consumes cannabis, there are long-term effects.

How does cannabis affect cats and dogs?

Cannabis has been used as a medicine for thousands of years. Its psychotropic effects are based on chemistry. The drug is absorbed through the nose or stomach and binds to specific brain neuroreceptors, altering neurotransmitter activity. THC activates norepinephrine, dopamine, serotonin, and acetylcholine as neurotransmitters in people and animals. There are two distinct types of receptors in humans and animals. Cannabinoid receptors CB1 and CB2 are two types of cannabinoid receptors, one of which (CB1) is involved with the central nervous system and the other (CB2) with peripheral tissues. Despite the fact that numerous cannabis pharmacological pathways have yet to be unlocked, it is assumed that CB1 is primarily responsible for cannabis’ actions.

Everything that enters the body has to be eliminated since it doesn’t have a lot of space to store everything that comes in. THC is extremely lipophilic, which means it can be stored in fatty tissues like the liver, brain, and kidneys before being excreted from the body. The majority (65-90%) of THC is excreted through feces, with 10-35% removed by the kidneys. A substance’s impact must be reduced by breaking it down and eliminating it via metabolism and excretion.

How toxic is cannabis? 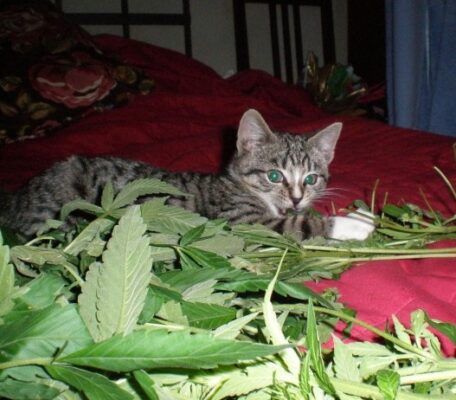 THC is quite tolerant to humans, but not all people and certainly not all pets follow the same pattern of intoxication. There is no legal safe threshold for THC exposure because one pet’s exposure may be higher than another’s. Variations in toxicity levels can be attributed to a variety of factors, including age, health status, and body size.

Fortunately, cannabis intoxication is rarely fatal. The average marijuana cigarette contains about 150 mg of THC. The minimal lethal oral dose of THC in dogs is considerably higher than that for humans; nevertheless, deaths have been reported after ingestion of meals prepared with highly concentrated cannabis, such as medical-grade THC. Until the invention of medical-grade products, fatalities were uncommon.

Can Marijuana Kill My Cat?

The most harmful edibles for cats are medical-grade THC and those that contain additional poisons, such as chocolate.

Prior to the creation of medical-grade marijuana products, pet fatalities caused by cannabis were rare. However, with the surge in medicinal marijuana usage, occurrences have risen. Cats can eat edibles without dying, however if you believe your cat ate any amount of marijuana, they should be closely monitored.

Is it correct that cannabis use can harm your cat’s health? Yes, it is. If your cat falls asleep after smoking marijuana and then chokes on their own vomit because they were severely poisoned rather than as a result of cannabis usage, it’s more likely that they’d die from choking on their own vomit before dying from THC toxicity.

In the end, it’s essential to keep in mind that if your cat eats cannabis or breathes secondhand smoke, he or she should be closely observed.

In cats, it takes around 30 minutes to an hour for marijuana’s effects to appear. Unfortunately, determining whether a cat has used marijuana is considerably more difficult than in people. A urine drug screening test can confirm if a person has used marijuana. However, because pet urine drug testing is not yet accurate, veterinarians will need to collaborate with the information you give and look for clinical indicators of cannabis consumption in cats to determine if your cat has taken marijuana. 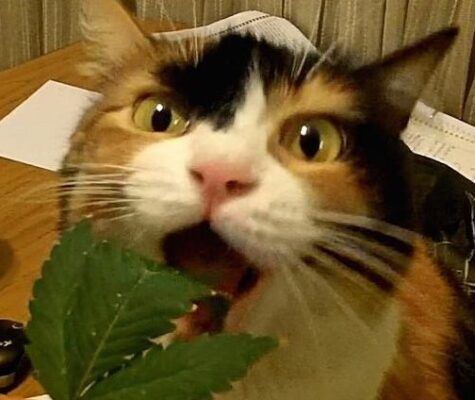 Your pet’s symptoms might be distressing. If any of these signs appear and you believe your cat has ingested marijuana, contact your veterinarian or a poison control center for further advice.

What Should I Do If My Cat Eats A THC Infused Edible?

If you’re sure your cat has ingested marijuana, get them to a veterinarian or an emergency clinic as soon as possible. Activated charcoal and vomiting can be utilized by your veterinarian to assist in the removal of marijuana from the system. Stomach pumping may be utilized in situations where the pet’s life is at risk. nIn less severe circumstances, your veterinarian might examine your cat and offer treatment options when necessary. Anti-anxiety medications can be used to help with agitation as the effects of cannabis wear off.

Dehydration, if left untreated, may lead to additional problems in your cat’s health. Your cat will be lethargic and show no desire to eat or drink, which might result in dehydration. An IV may be given by your veterinarian to assist with this scenario as well as advise you on how to entice your cat to drink more water.

When you’re at home, keep your cat in a quiet and secure setting that is free of noise and sensory stimulation. Cannabis has been proven to disorient cats, thus limiting input might make them feel more comfortable while healing.

You’ll be absolutely shocked at how frequently this term is searched. Cats can get high from eating, smelling, and playing with catnip… But what about cannabis? I hope you reconsider after reading this for everyone who thinks it’s a great or amusing idea to make a cat high.

A cat on a “catnip high” is not comparable to a human on a cannabis high. It’s more like a mild hallucinogenic that enhances the senses. Catnip, unlike THC, does not contain any chemical components. Just as an FYI… No, eating catnip will not make you high; if you try it, you’ll end up very sick. Leave the catnip to the cats; they know what they’re doing with it better than anybody else.

Can Cats Get High from Cannabis?

Is it true that if we humans are unable to get “high” on catnip, cats can’t either? No, they cannot become “high.” Cannabis is unlikely to be eaten by cats since they are picky about what they eat. They are more likely to vomit it back up or have an upset stomach because of its finickiness if they ingest cannabis. They may get a “terrible trip” as a result of this indigestion. THC can induce spasms and seizures in cats, resulting in self-inflicted biting on the tongue, brain damage, mishaps, or even death. Have you decided it’s not?

What About Blowing It into the Cat’s Face/Ears?

Smoke is a noxious substance that cats despise. They despise the smell just as much as we do. It can cause vision problems and infections that can lead to blindness. As a result of smoke, cat retinas become dry, which is both unpleasant and harmful. Would you make someone drink if they didn’t enjoy it? This is also the case. If you do this, you are committing animal cruelty. It’s not amusing or cute to put it plainly. Given the fact that forcing medicine on an animal without first determining what may happen as a result of it is not fair, if you know someone who does this to their cat, give them a good argument for them to cease doing so since it isn’t right to force medication on an animal without fully understanding what happens when it digests medications.

Can Medical Cannabis Be Used for Pain Relief in Cats?

This can happen in the future at your veterinarian’s office, but it will not make them “high” or “tripping.” They would not feel any of those symptoms. Most likely, they would experience pain relief and a mild drowsyness. That is all there is to it. It wouldn’t be the same as giving them your stash or blowing smoke into their face. Patches are being tested on cats, dogs, and horses that contain cannabis to be used for pets who suffer from pain in order to see if they work properly together. It’s a time-released and stable form that won’t produce any negative side effects or “highs.”