The cannabis plant is covered in resinous glands known as trichomes, which contain THC, CBD, terpenes, and other compounds. Trichomes appear to be crystals when they are dry and fall off the plant. Kief is the result of trichomes drying and breaking away from the plant.

Kief is usually darker than trichomes, ranging from golden to brown. It’s a powdery substance that’s somewhat sticky, but less so than trichomes on a bud. Another name for kief is “pollen.”

Grinders are used to break down cannabis into small, uniform pieces for rolling or packing bowls. Grinders have a separate compartment at the bottom called a kief catcher for collecting kief.

Kief can be added to bowls or joints for an added kick. It can also be pressed into hash. 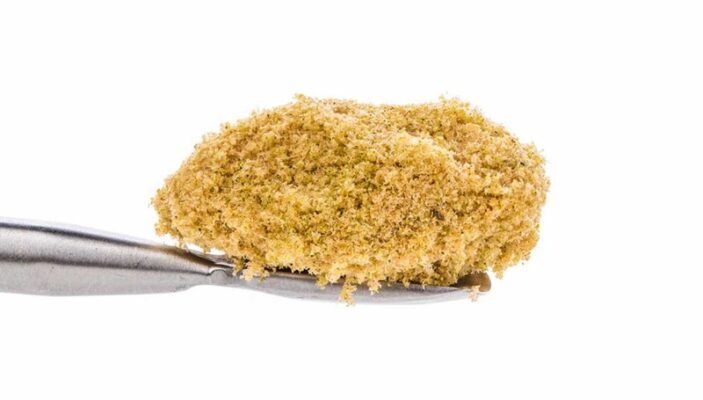 When purchasing kief at a dispensary or retail shop, keep in mind that the higher quality kief will be lighter in color. Kief that appears dark or green still contains some plant matter, while well-cleaned kief is more of an off-white color.

What Are The Benefits of Kief?

Kief is a type of cannabis concentrate that gives a more powerful high than many other marijuana products. Kief’s strength varies depending on the cannabis plant from which it’s derived, but it frequently contains more than 50 percent tetrahydrocannabinol (THC), which is a significant increase from marijuana flower’s average THC of 12-25 percent.

Kief is a popular method for extracting THC, cannabidiol (CBD), cannabigerol (CBG), and other cannabinoids from cannabis plants with minimal effort. It also removes the plant material that may produce a harsher smoking experience.

Kief is simple to collect and use. Because it isn’t as difficult to extract as some other concentrates, gathering kief at home is fairly easy.

You may consume kief in a variety of lung-friendly ways, such as using it in a vape pen or incorporating it into edibles, which eliminate the risks and toxins of combustion.

As previously stated, most people just sprinkle a little bit (or a lot) of kief on top of their marijuana in pipes or joints; nevertheless, this is an excellent technique that adds power and/or flavor to ordinary blossoms. Our suggested method for smoking kief is to utilize a screen over a glass pipe. You may get durable specialty titanium screens for hash smoking at well-stocked head shops, but you can also use a regular stainless steel pipe screen without any trouble.

Heating the kief gently over an indirect flame (held about an inch or two above the kief) is the best method to release the oils and avoid burning it, and high-grade water hash should begin to bubble and melt, leaving behind little residue and providing a full-flavored hit. Kief that has not been properly refined, on the other hand, can taste harsh and woody due to the inclusion of plant debris, so if flavor is an important aspect of your smoking experience, it’s critical to try and get your kief as clean as possible before lighting up. If you have access to a microscope, look for flecks of green and trichome stalks in your kief; this indicates that your kief isn’t entirely pure and may require more refining.

How Strong is It?

Smoking kief, in a nutshell, produces a far stronger effect than normal cannabis flowers. Rather of containing between 12 and 25 percent THC, kief (depending on purity) can contain up to 70 percent THC – which means you’ll get a more powerful effect from less smoke consumed. Kief is usually strong since it’s generally created by mixing various strains over time, resulting in a varied combination of cannabinoids, terpenes, and flavonoids. Many experienced smokers claim that kief gives them a powerful yet narcotic high that’s ideal for sleeping on.

Moonrocks are a fantastic way to get your fix of cannabis if you’ve never tried them! They’re very powerful, and they’re a great deal cheaper than concentrates. Heat a marijuana oil gently and apply it to your buds. Then sprinkle the kief over the buds as soon as they’re warm. Alternatively, use tongs to roll your buds in the kief. After they’ve hardened, use your hands to break them up and add them into a bowl for some high potency. Because it grinds your moonrocks too finely with a grinder, don’t use one during the process.

Make Your Own Vape Juice with It

Not many people even consider turning kief into an e-juice. You will need the following to do so:

We advise you to use a 1:1 ratio of propylene glycol and vegetable glycerin in the double boiler, then add your kief. Allow the combination to heat until it has melted smoothly.

Kief is a potent and aromatic plant material used as an ingredient in cannabis cuisine. Because it has greater flavor than buds, it is ideal for cooking. Before using kief for cooking, be sure to decarboxylate it. Bake for 20 minutes at approximately 220-240 degrees Fahrenheit in an ovenproof dish. Combine the kief with butter to make cannabutter by mixing it with ground herbs.

Rosin is a non-solvent extraction technique. It uses pressure and heat to extract resin from your kief or hash. Only the most experienced individuals can tell rosin from sap or shatter, and only they may do so successfully. Kief users get an extremely powerful concentrate as a result of using it.