When the time comes to select a bong that fits your requirements, there are several things to think about. Will it be kept in a drawer at home, on a table, or carried around? If you’re clumsy, you’ll want something robust. Fortunately, bongs come in all kinds of shapes and sizes so they can fit the demands of various marijuana users. We’ll go through all of the aspects that should be considered while picking out a bong. 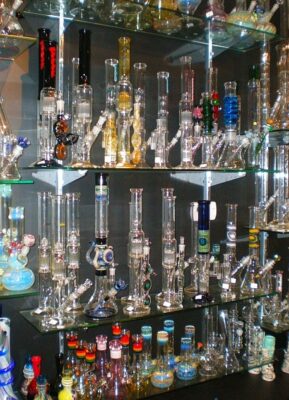 The first thing you should think about is if you want to smoke cannabis flowers or concentrates. This will help you choose what size piece you require.

If you’re going with a floral set-up, bigger is better for distributing harsh hits. Dab rigs, on the other hand, are best kept small because there’s no point in filtering hash oil vapors.

The second thing you should consider is the product’s longevity. When dropped, a bong made of ceramic or glass is prone to shattering. Acrylic bongs may rebound when dropped, but they are still susceptible to cracking.

The thicker the glass surrounding the bong, the less likely it is to break. Does the glass appear strong or does it sound like a wine goblet when lightly flicked? Thicker glass is generally more costly.

If you’re not a clutz and don’t believe you’ll smash the bong, consider adding money to attachments or a bigger percolator bong.

There are also unbreakable silicone bongs available for those who want to stop breaking glass, ceramic, and acrylic bongs.

What is the Best Joint Size?

Today, having a male joint puts a limit on your choice of replacement bowl components and attachments. If you don’t have any attachments you want to use and prefer the most frequent female joint size (14mm), we recommend buying one.

You must also consider the position of your connection. Traditional beakers have joints and bowls that emerge from a detachable down stem at a 45-degree angle. Many contemporary pieces feature joints at 90 degrees with a fixed stem.

Percolation is a significant consideration when selecting a bong. Percolators have one or more diffusion points to filter or chill the smoke. The three things to think about when choosing a percolator are filtration, draw resistance, and clogging ease.

If you’re smoking dry herbs with your bong, make sure you have extra percolators to enhance the smoke’s smoothness. When smoke is smoother, you can take bigger rips and get higher levels of THC in a shorter amount of time. As a result, you’ll be higher than usual while enjoying less throat and respiratory discomfort.

However, too much percolation is undesirable, especially when it comes to concentrates. It’s better to keep dab rigs simple. More percolators result in more drag and make clearing the bong more difficult.

There is a cost to having a dry herb bong. For smoother hits, you’ll need more drag. Percolators, on the other hand, will require greater effort from your lungs with no advantages. When it comes to dabbing, search for a bong with one to two percolators that won’t readily clog when oil or “reclaim” starts accumulating within the component.

Another thing to think about is how difficult it will be to clean the bong. If you’re not prepared to clean your bong on a regular basis, you should get something simple to maintain that won’t clog quickly. Clogged percolators have smaller holes than those with bigger slits.

Some components are more difficult to clean than others, and some need cleaning more frequently for optimum functioning. Keep an eye on the percolators. If a bong has three separate percolation chambers stacked on top of each other going up the neck, it will be difficult to get cleaner into the middle chamber.

There are a few more things you can do with your bong after you’ve found one that’s right for you.

There are ash catchers in between the bowl and joint to collect any ash or tar. Many contemporary ash catchers feature percolators for further filtration. Not to mention, ash and tar will accumulate in the ash collector before they do in the rest of the bong. If you clean the ash collector on a regular basis, you won’t have to clean the rest of the bong as frequently.

There are also various attachments, such as glycerin coils, used to keep the smoke in your bong cool. Because it won’t crystallize in a freezer, glycerin is a liquid that doesn’t grow larger and break the glass.

Choosing the most suitable bong is all about knowing what goes into one. Use our guide to help you select the best item for your smoking preferences. People sensitive to smoke’s intensity should steer clear of large pieces with a lot of percolators, but people with limited lung capacities shouldn’t overdo it with too much percolation. It will be difficult to rip because the paper will become stuck in between the holes.

A scientific-style beaker or straight pipe is a hit with anybody who appreciates a traditional bong rip. If the smoke isn’t smooth enough, you may always add attachments to filter it further.

When attempting to hide the odor of marijuana, it’s preferable to smoke a bong rather than roll a joint. You’ll also get high quicker. Dabs are an even more stealthy method to get high fast. Anyone interested in using their bong for concentrates should consider purchasing the best quartz bangers, carb caps, and how to choose a dab rig.