By burping your weed, you allow access to the best flavours that cannabis has to offer. Not only that, but it prevents mouldy disappointment. The steps below will help show you how easy it is to process flowers post-harvest for smoothness and flavour like never before.

Understanding how to burp your weed refers to the process of purging trapped air from inside jars or containers holding recently-harvested cannabis. This is an important curing step that helps improve the taste and smell of your stash. Most people believe that the growing process only begins with sowing seeds, but it actually goes much further than harvest time. Although it may seem like the work is done after cutting down the plants and taking off the flowers, there is still more to be done. The first step is drying the harvest; then comes curing, which brings us to burping.

The process of burping cannabis buds is crucial to the curing process, as it prevents mould and improves taste. However, this step is often underestimated or overlooked. Read on to learn everything you need to know about how and why you should be burping your marijuana plants.

Why Do You Need to Burp Your Buds?

It’s crucial to understand the curing process to grasp why burping is important. When you place dried buds in glass jars for curing, not much appears to happen; however, on a molecular level, your harsh, chlorophyll-rich buds are transforming into smooth and tasty treats. This is due  to enzyme processes that continue even after you sever buds from their branches. Proteins within the flowers continue powering chemical processes resulting in the breakdown of sugars and starches as well as leftover nutrients.

The presence of harsh chemicals separates uncured cannabis from the smoother, cured version. Not only does curing break down undesired chemicals, it also helps to preserve desirable molecules like cannabinoids and terpenes.

Now, let’s discuss burping. When the aforementioned enzymatic reactions take place, moisture and CO₂ start to build up in the curing jars. If humidity isn’t regularly released (through burping), it will eventually lead to an increased risk of mould growth; opportunistic fungal pathogens can jump into action when environmental conditions are favourable. Releasing moisture and air is what burping does until the humidity becomes more tolerable. If you release too much though, it will stop the chemical reactions that make your weed’s flavor better in its tracks. Finding a middle ground with your burping techniques is key to getting optimal results.

How to Burp Weed

You might think that burping cannabis is the way to go, but how do you actually do it? The process is all about monitoring relative humidity, which means checking the amount of water vapor present in relation to amount needed for saturation. It doesn’t require any crazy math skills—just two different approaches you can choose from. The first option (and simpler of the two) involvesBurping based on time; see below for those directions:

By investing in an extra piece of equipment, a digital hygrometer, you can avoid burping as often. You’ll want to keep the relative humidity reading on the device above 55% to prevent your flowers from drying out too much and below 70% since that increases the likelihood of mold significantly. As with the method aforementioned, each time you do need to burp, shoot for a 30-minute timeframe.

What Type of Containers Are Best for Burping?

Glass is the best material to use if you want to cure your weed properly. Not only does it look better, but some plastic bags and containers allow air particles to move through them. Glass does a much better job of trapping internal air and keeping external air out because the molecular spaces between glass particles are so small. If you’re using clear jars, store them in a dry and dark location to prevent cannabinoid degradation.

When to Stop Burping

You will need to belch your weed for the duration of its “lifespan”, though less often as time passes. In the early weeks, jar metabolic rates are high, requiring more burping according to the steps above. Eventually, however, as metabolism and moisture production slows down, you’ll only need to do it once per month. 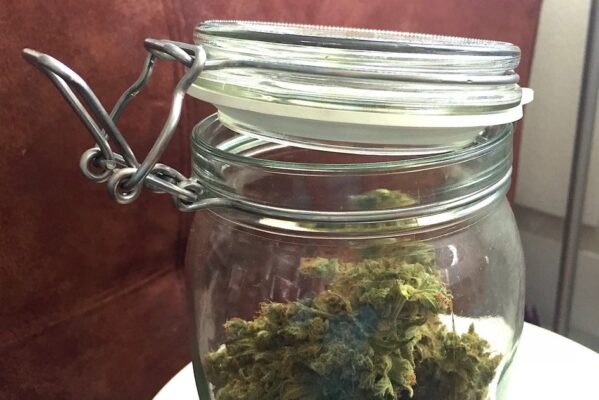 When Not to Burp Curing Jars

RQS developed the Humidity Control Pack to make the curing process more streamlined—it even eliminates the need to burp. Each sachet works as a two-way moisture regulator, maintaining levels so they don’t drop too low or raise too high. Instead of burping, you simply need to switch out your humidity pack when the indicator card changes colour.

In order to enhance your weed’s potency, you first need to make sure that you optimize all of the other important aspects of drying and curing. This includes drying your weed optimally by exposing buds to good air circulation and a relative humidity level between 45–55%, until the stems snap. Depending on conditions, this process can take up to 2 weeks in total.

If you don’t wet trim your buds (in other words, trimming directly after harvesting), then you’ll need to remove the sugar leaves following the drying process. Next, move your weed into glass jars for curing. What happens next will be determined by which approach suits you best:

Follow a schedule: The burping schedule listed below should be followed to ensure the curing process goes smoothly, regulate moisture levels, and produce a great tasting final product.

Use a hygrometer: These small digital devices allow for precise monitoring of the relative humidity levels. Simply burp when needed to maintain a between 55–70%.

Skip a burping schedule altogether: In order to make your life more simple and easy, use the RQS Humidity Control Pack to effortlessly control moisture levels with little-to-no input from yourself.

Properly curing your weed will take some effort, but it’s worth it. If you don’t cure your weed, experienced smokers will be able to tell the difference in taste and quality.