Ice Cream Cake is a delicious dessert, but it’s much more than meets the eye. If you’re searching for vanilla-scented cookie-cheese bliss, it’ll definitely do the trick. In addition to its tastes, the prominent terpenes add bursts of heat that enhance the experience. THC levels in Ice Cream Cake are very high, which should cause new users to be cautious. Otherwise, Ice Cream Cake should be an amazing experience. Looking to try something new? Check out this Gelato weed.

Ice Cream Cake develops a nutty vanilla aroma as it matures. They’re painted in various shades of green and purple, with rusty hairs and frosty quartz gems. Limonene and Caryophyllene are the major terpenes, with some Myrcene peeking through. These combine to give it an orangish overtone that is almost citrusy, complemented by cinnamon spice. Lavender will also be identifiable to the really inquisitive cannabis connoisseurs.

The strain has a shady history, adding to its allure. We know it was created by Mad Scientist Genetics in Bakersfield, California. And we’re positive there was a wedding at some point; we just don’t know who or how. Some claim Dream Cookie married Cheese Cake, while others believe Wedding Cake hooked up with Gelato 33. There is disagreement over the parentage of the debatable genetics, which suggest a 75/25 Indica/Sativa mix and delectable tastes that must be derived from something sweet and nutty like vanilla. We’re not sure from which direction it’s coming from. 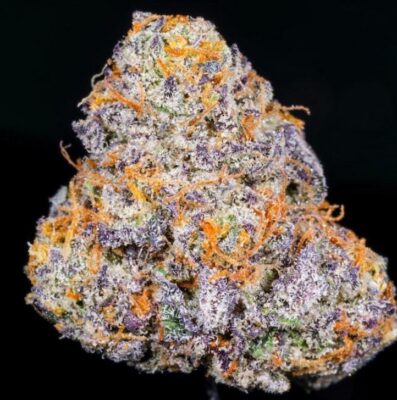 Ice Cream Cake is a hybrid strain with THC levels in the mid-20s. It’s either pungent or fruity, depending on who you ask. Ice Cream Cake has effects that are potent due to its mid-twenty cannabis content. Running around getting stuff done and controlling your life may be therapeutic for a Type A personality person like yourself.

The sensation of a relaxing drug will leave you frozen in place, tempting you to succumb. Your racing thoughts will be gone, replaced by a sea of melted ice cream where you can float bodily away into who-knows-where. Ice Cream Cake is ideal for treating depression and pain as well as sleeplessness because of this. The enticing tastes may also jumpstart a sluggish appetite, making it perfect for individuals who are experiencing hunger loss or nausea.

Ice Cream Cake, which begins as a mental burst of energy that fades into unfocused bodily sensations that lead to sleep, may be a wonderful evening companion for heavy workers and deeper thinkers. We don’t know where it comes from. But we do know where it’s going!

If you enjoy ice cream after dinner, Gelato #33 is a delicious option. This strain has an intriguing history as San Francisco Cookie Fam Genetics breeders have offered up several phenotypes of the bud over time. #33, named for Larry Bird, considers itself in a class of its own, and for good reason. “

THC levels that average around 22% may not seem very powerful, but your experience will tell a different tale. Gelato #33’s nuggets are exquisite, with a delicate structure and plenty of frosty trichomes. Her parents, Sunset Sherbert and Thin Mint Girl Scout Cookies, were scents of orange, earth, and mint while tastes are more in the berry/lemon category.

Even the most seasoned smokers should note that this strain has a very powerful impact. An immediate head rush will overwhelm you, and while you’ll be ecstatic and uplifted, it might be a bit uncomfortable. After that, bodily relaxation sets in, and when combined with an all-over buzzing feeling, you’ll really be having fun. Gelato #33 is sociable, creative, and soothing, which makes her one of the finest strains ever created.

Gelato #33 is ideal for medical usage because it delivers a very psychoactive experience with significant physical effects. Above all, mental issues such as sadness and stress are relieved to the point that you’ll be smiling no matter what happens around you. The buzz generated by Gelato #33 helps to relieve muscle aches and pains caused by physical discomfort. Users who are particularly sensitive, or those who smoke a lot, may benefit from Gelato #33’s ability to fight sleeplessness. 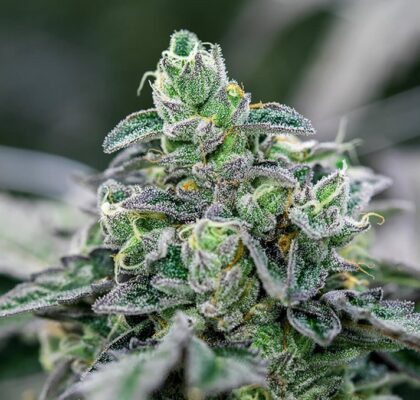 The plant’s cannabinoids are produced by a mix of cannabis sativa and indica strains, with Humulene being the most abundant terpene. Limonene and Terpinolene are also present in low amounts. Humulene is a woody, spicy terpene that gives many strains their distinctive earthy tone and pepper taste. You may recognize it as the flavor of hops, which also contains Humulene. When cultivated indoors, the strain matures in 7 to 9 weeks; when grown outdoors, it flowers in late September or early October.

Surprisingly, Wedding Cake doesn’t have the most exciting aroma. It’s not a mad burst of vanilla sweetness like you’d expect, but it is a more subdued combination of earthy and flower aromas with sweet undertones. The flavor is doughy and sour, almost like sourdough bread.

Users who want to manage their nerves or anxiety will benefit greatly from Wedding Cake. The term neuromuscular regulation refers to the ability of Wedding Cake to assist people deal with sadness and reduce symptoms linked to muscular sclerosis and fibromyalgia.

Wedding Cake is a popular strain because of its medicinal properties, which make it highly desirable for individuals who can handle the THC concentration. It doesn’t have as strong or distinct a flavor as new users might anticipate, although its resistance in the ground and in your mouth has made it a favorite among growers and consumers alike.