The world of cannabis has changed a lot in recent years. In fact, in this last decade the plant has been legalized in different countries and regions around the globe, and trails towards its therapeutic use have been blazed. Its consumption via vaping, edibles and concentrates has also increased.

Something that has not changed much, however, is the most common form of cannabis consumption: mixing it with tobacco to roll a cigarette.

Europe tops the list worldwide in this habit, and these seem to be some of the reasons most cited by users:

In countries like the US and Canada there is a cultural disdain for combining tobacco with cannabis. Extensive regulatory reform, commercialism, and a diversity of concentrated products have fueled a gradual shift toward vaping.

The list is, undoubtedly, much longer, and continues to generate debate among experts today. In fact, Britain’s Global Drug Survey (GDS) launched an anonymous questionnaire this year to verify all the reasons why this practice continues and to better understand the patterns that might have an influence on changing it. 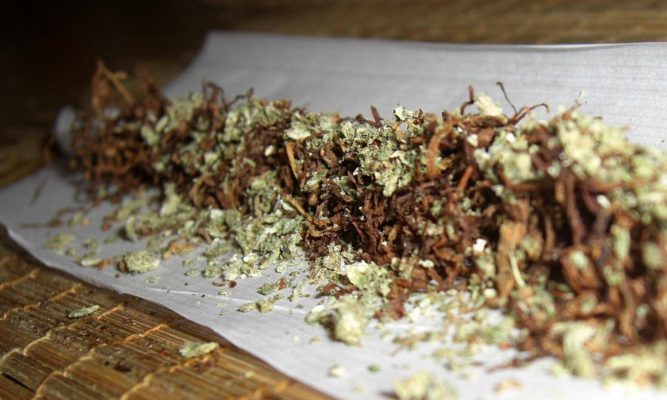 The fight against tobacco addiction

Despite the massive consumption of this mixture, this habit has escaped the attention of health authorities for many years. Curiously, it seems that in recent times the tables have turned, as social acceptance of marijuana consumption is on the rise, while smoking tobacco is, increasingly, frowned upon.

Thus, the home consumption of tobacco has gone into decline, while that of cannabis is increasing year after year. This is reflected in a study published in 2021 in Addictive Behaviors highlighting the detrimental habit of mixing the two substances in terms of advancing in the fight against tobacco.

Where is cannabis most mixed with tobacco?

A 2019 GDS study shows us the geography of this habit amongst cannabis users around the world, with the percentages of users who consume this mixture:

As can be seen, there are many countries in which it is more common to smoke marijuana without anything else, and they are almost all in the Americas. However, in much of Europe only 10% to 20% of consumers have this habit.

For many Europeans, cannabis is a gateway to tobacco, as many people are first exposed to tobacco when they smoke their first joint, a phenomenon known as the “reverse gateway effect.”

Why are tobacco and marijuana mixed more in Europe?

There are various theories to explain why in the Americas this practice is not popular, while in Europe it is. One of the reasons could be rooted in the arrival of tobacco in Europe: when it arrived in Spain, from Cuba, from there spreading to the rest of the continent, it did so in the form of a cigarettes. Thus, mixing tobacco with cannabis for combustion would seem like a logical step.

In the United States and other countries in the Americas, however, chewing and inhaling tobacco were historically common form of consumption, so alternatives to just smoking cigarettes – such as eating cannabis foods, or vaping – might have been more natural in these countries.

Other theories suggest that in Europe cannabis is mixed more often with tobacco because in the 1960s and 1970s Europeans mostly smoked hashish from Morocco and the Middle Eastern countries; as hashish is easier to smoke in combination with tobacco, when marijuana use became more widespread, this habit led to the custom of rolling marijuana-and-tobacco cigarettes.

It is not necessary to smoke cannabis with tobacco to enjoy its benefits. Alternatives include eating it or inhaling it through a vaper. 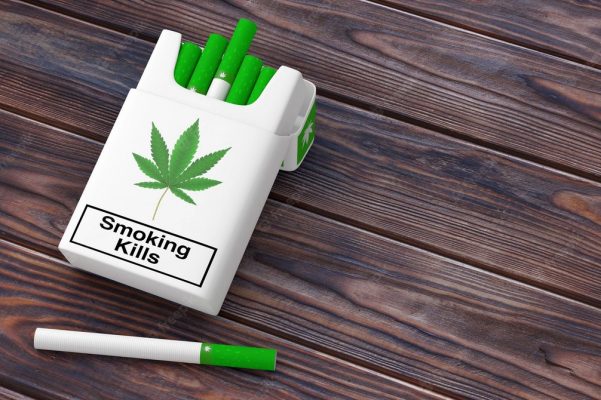 The consequences of using marijuana in combination with tobacco

To gauge the effects of this consumption pattern, in 2017 several research centers in the United States carried out the first comprehensive review of the consequences of this habit, selecting 45 scientific articles that had addressed this problem. Although they concluded that more research is needed, they were able to identify several harmful effects:

In addition, other research has indicated that individuals who use cannabis and nicotine are at risk for degraded physiological functioning, as well as poorer mental health, lower life satisfaction, more legal problems, and less academic success in college.

How tobacco intensifies the effects of marijuana

The effects observed included tobacco’s ability to increase the amount of THC inhaled per gram of cannabis. In other words, those consumers who claim that cannabis with tobacco increases the former’s effects seem to be right.

A study published in 2008 in the journal Inhalation Toxicology indicated that tobacco boosts the efficiency of THC vaporization by up to 45%, such that smoking a 50/50 mixture of marijuana and tobacco can lead to the same psychoactive effects as smoking 100% cannabis. In reality, any dried plant material could be used in place of tobacco, and it would render vaporization more efficient, as what happens is that the hot tobacco smoke vaporizes the THC, resulting in less being lost in the combustion of the cannabis.

A study previously published in the journal Drug Alcohol Dependence measured the effects of the concoction on heart rate. Since both nicotine and cannabis can speed up the heart rate and increase blood pressure, both substances were tested to see how they affected each other.

The mixture did, in fact, lead to an increase in heart rate: by around 18% in men compared to pure cannabis, and 8% in women, who generally exhibited reduced physiological effects when consuming this mixture. An increase in heart rate can, undoubtedly, damage the health of people with existing heart or vascular diseases.

Cannabis is not the health problem, the tobacco that people mix with it is Marijuana and the lungs

While the effects of tobacco smoking on the lungs are detrimental, and well known, there is not much research into the effects of smoking cannabis on the respiratory system. However, a study published in 2018 in the Journal of Thoracic Oncology found that cannabis contains many of the toxins and carcinogens found in tobacco smoke. Among other substances, the following were identified:

Many of these components are carcinogenic and harmful to the respiratory epithelium, such that smoking marijuana is associated with airway inflammation, although greater damage has been documented in smokers who smoked tobacco in addition to cannabis.

Even so, the study concludes that there is no firm evidence that smoking cannabis increases the risk of lung cancer, but simply because there are no results proving it yet.

Smoking (burning) anything is bad for the lungs. Smoking changes the properties of a substance, often forming toxic and carcinogenic compounds

The benefits of consuming marijuana without tobacco

The study also highlights the benefits of cannabis consumption with reference to its medical applications. Cannabis has been used in various trials to reduce the chronic pain caused by various diseases, including cancer, as well as to alleviate the adverse effects of its treatment. Although further research is needed to corroborate its efficacy and treatment, this therapeutic usage of marijuana has many benefits that should be explored.

The adverse effects of tobacco, on the other hand, are many, and have been extensively studied. Tobacco is horrible for one’s health. According to the WHO, it kills more than 8 million people a year worldwide and is the leading cause of preventable death. It causes dependence, worsening abstinence from cannabis, is expensive, and its use is totally unnecessary to be able to enjoy marijuana. In fact, it is probably the single largest preventable cause of health damage among people who use cannabis.

Therefore, it is vital to reflect on the habit of mixing cannabis with tobacco, and learn to separate the two. Consumers should be aware of the effects of this mixture, which does not seem to provide benefits, but rather quite the opposite.