The finest marijuana you could hope for decades ago was brick weed, which was legendary. It’s likely that it had less than 3-4 percent THC. However, it was sufficient to get people high back then. Growers today have developed sophisticated cultivation techniques that yield plants with a THC concentration of 25% or more.

If this isn’t enough for you, a marijuana wax concentrate might be just the thing. Even the best quality versions include over 90% THC. This amount of psychoactive cannabinoid will astonish even seasoned smokers.

There are numerous concentrate types accessible when you visit a cannabis dispensary. Shatter, wax, crumbles, budder, and several additional options are available. Depending on the extraction process, they have different consistencies, colors, and personalities. In this article, we’ll walk you through the process of making marijuana crumble wax.

There are currently over 300,000 concentrate items for sale. Extracting labs and manufacturers of equipment have had to develop sophisticated tools to create high-quality cannabis concentrates. You might be shocked to learn that concentrates such as budder, crumble, and wax all follow the same production procedure.

The procedure for making crumble wax is nearly identical to that of budder and shatter. The pre-purged oils used in the creation of crumble, on the other hand, are more wet. They’re also a thicker texture with a slightly higher melting point compared with budder and shatter.

The end result is a crumbling physique that looks like cheese once the purging process is finished.

Purging for a longer period at a lower temperature can turn wax into crumble. The end product is a crumbly concentrate filled with numerous terpenes and tasting better than wax. The name gives away all of the secrets. It’s difficult to work with the material by hand. If you use a dabber’s flat end to scoop the crumble into a bowl, it’ll get under your nails and you’ll only be able to remove it via thorough washing. If you’re trying to dab crumble, we recommend using a dabber’s flat end instead of your finger. 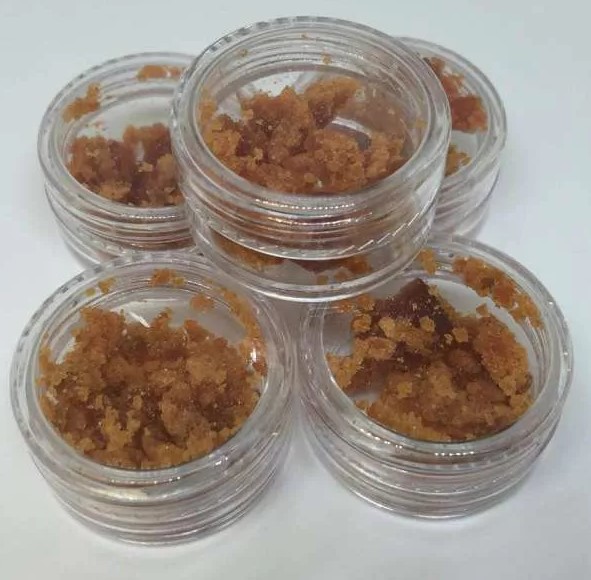 Prior to the substance ever crumbling, it must be removed from the plant. After harvesting, the buds are initially separated from the rest of the plant. Buds are then weighed and placed in vacuum-sealed bags.

Manufacturers will keep it in a freezer around 40 degrees Fahrenheit if the marijuana was produced indoors. If the crop comes from an outdoor farm, it’s stored in a cooler with liquid nitrogen or dry ice.

The goal is to keep the bud frozen for two hours to maintain the chemical profile of the plant. It may also preserve the taste and smell of cannabis that has been cured and dried. Another advantage of freezing marijuana is that a business can quickly offer consumers with a strain that has become rare.

You put the buds into a special extraction system whether they’re frozen or not. The cannabinoids are then separated using a solvent such as butane. Some firms advocate using CO2 extraction instead, believing it to be more sanitary. When they use butane, all traces are removed long before the extract is transformed into wax.

Some incredible extraction tools have been created by larger organizations. Precision Extraction offers a machine called The Judge in Michigan. It can handle 80 pounds of marijuana each day, which is 1,280 ounces!

In certain circumstances, a company can add a tall steel column filled with butane or propane gas to the solvent chamber if the marijuana is frozen. The vapor is first cooled and condensed by means of a recirculating chiller.

The solvent passes to the material column, where it saturates the marijuana plant and binds with its lipids, terpenes, and cannabinoids. The solution next travels to another room, where it is cooled to a temperature of -120°F or below. The lipids in the solution solidify and separate from the solvent that contains the pungent components as well as psychoactive materials. A filter traps the fatty solids before they enter a heated collection chamber.

At this point, the bulk of the solvent has been driven away. The system can recover 99% of the evaporated butane, which will flow through it once again. Now, the collection chamber is brimming with a beautiful sticky resin that we all adore.

The resin is degassed. A skilled technician uses trays with resin in them to seal them in a vacuum oven. Hydrocarbons are removed as the resins evaporate. This is tough since some of the terpenes and cannabinoids have boiling points that are comparable to that of the solvent.

Did you know that the extract’s physical properties differ considerably from strain to strain?

For example, motor oil may be obtained from weed with a high terpene content. Blue Dream’s extract, on the other hand, is firm and resembles glass in texture. Firms will modify the extract at this point to produce shatter, wax, budder, or crumble.

The purging and whipping process in the creation of crumbles is similar to that of dumplings. Not only does this help to retain more flavor, but it may also be beneficial. According to Moxie, lower temperatures produce less cancer-causing chemicals. The budder is made by combining extract with a Pyrex container in a different way than the crumble. You lose terpenes while increasing the possibility of carcinogens in the end product using this technique.

We’re guessing you don’t have access to million-dollar equipment. Fortunately, it is possible to make your crumble at home. To properly execute it, you’ll need the following items: 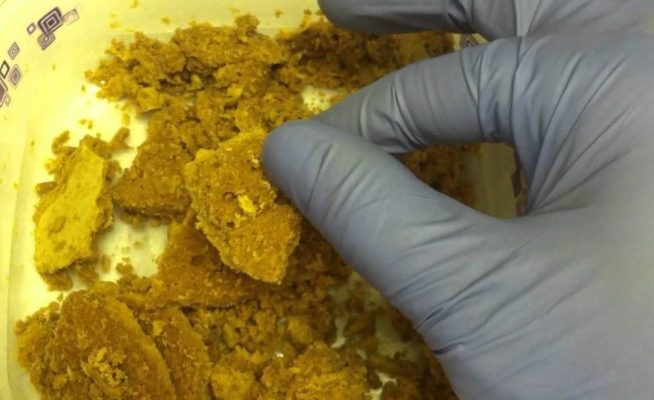 Here is a step-by-step guide:

Fill your roller tube with marijuana buds, then place them in the Pyrex container. Pack it tightly and blow on the marijuana to ensure that no air gets through. Freeze butane for 24 hours after adding it.

Fill the roller tube halfway with gasoline and light it up. Allow for plenty of ventilation while filling the roller tube. When you’ve finished burning the gas, inspect the paste to ensure that it’s formed. It’s a good idea to leave the room until the gas has fully dispersed if you’re using gas.

Set the water to boil on a ceramic or electric hobs, since the open flame of a gas hob is too dangerous. Set the burner to low heat after turning it on. To ensure that the vapor from the boiling water directly hits the tray, put your Pyrex tray on top of the pot once it’s hot.

Ensure that the mixture’s temperature does not get too high with an infrared thermometer. You run the danger of terpenes evaporating if you exceed this temperature. Remove the tray if the heat approaches that level. Wipe away any moisture and let it sit for a while before replacing it in the cooker.

Pop bubbles that appear using your dabber. When the mixture gets dry and no more bubbles form, scrape the tray’s bottom with the blades.

Keep an eye on the temperature to make sure it doesn’t go over 104 degrees. You should have a paste with a cookie-like texture after a few hours, rather than the transparent and gloopy mess you had before.

Remove everything from the tray with the blades and set it on the silicone mat.

Set the desiccator in a sunny location, add the mixture and connect it to the vacuum pump. Stop using the desiccator and maintain the vacuum until the mix is ready. If you must, set a 15-minute timer on the pump so you may check on its progress.

It’s a good idea to take pre and post photos to help you decide if the combination is dry.

Finally, carefully let the air back into the vacuum after removing your crumble. It should be simpler to make subsequent crumbly masterpieces if you can successfully complete it just once.

It’s even simpler to crumble cannabis oil if you’ve removed the cannabinoids first. After the solvent has been removed, whip up the oil and return it to vacuum at the same temperature as before.

Crumble has the highest terpene levels of any concentrate. As a result, it’s perfect for people who value taste and fragrance above everything else. If at all feasible, perform a lengthy vacuum purge for several days to keep the terpenes in tact.

Krumble is also the driest concentrate, and you can break it down into a tiny amount for each session. It may be dabbed in a rig, combined with flowers or herbs in a bowl, or vaped with a vaporizer pen. Because it is concentrated, use only as much as needed!