This article is a breakdown of shatter marijuana concentrates, their uses, and the debate surrounding them.

Cannabis shatter is one of the most recent cannabis industry trends. Learn more about this potent concentrate, what it is, how it’s produced, and more by visiting the page below. People no longer only smoke their marijuana in a joint or a bong; rather, they consume it via inhalation or vaporization.

Shatter is the newest craze in the cannabis world, and if you don’t have a decent vaporizer or a dabbing rig, you’re out of touch. Shatter is one form of cannabis extract that has recently gotten a lot of attention.

Cannabis shatter is a type of BHO (Butane Hash Oil) that generates uncertainty in consumers. To clear up some of the confusion, we’ll take a closer look at cannabis shatter. We’ll define what it is, how it’s made, and try to dispel the smoke surrounding it.

What Is a Concentrate? 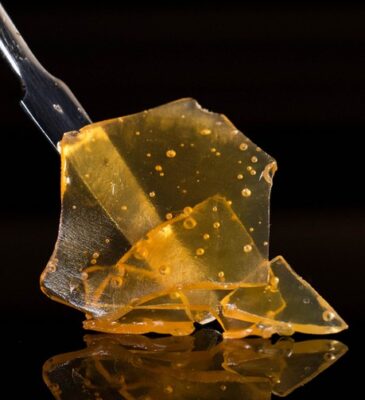 Concentrates like shatter, wax, honey oil, and other cannabis derivatives produce a different and more powerful high than ordinary flower. They’re essentially cannabis that’s been refined and concentrated using a technique to isolate and concentrate the chemicals needed for marijuana – namely, cannabinoids such as THC (tetrahydrocannabinol) and CBD (cannabidiol), as well as terpenes.

The best completed concentrate for recreational users is strong and rich in THC. THC concentrations in shatter can reach 80 percent. Cannabis oil concentrates with low amounts of THC and high levels of CBD are often utilized for medical purposes.

How Are Shatter Marijuana Concentrates Made?

To make shatter, a solvent such as CO2 or butane is required. Manufacturers use cannabis plant material in a holding container and press a solvent through it to extract the cannabinoids in order to create butane hash oil (BHO), CO2 shatter, or wax.

The procedure is a hazardous one that necessitates an understanding of how to properly handle the chemicals in use. Novice BHO producers have created explosions, fires, and injuries by using incorrect equipment and extraction processes inspired by do-it-yourself YouTube videos. CO2 extraction is a safer technique that uses less synthetic components.

Dabs are a type of concentrate that is comprised of cannabis. They’re produced by extracting cannabinoids from the plant, then purifying them. Dabbing is the most well-known technique for consuming these substances, which are also known as “dabs.”

HOW IS SHATTER MADE?

Shatter is a solvent-based cannabis concentrate. It uses butane to remove trichomes from the cannabis buds and trimmings, concentrating the cannabinoids and terpenes present in the plant.

Trichomes are tiny, glass-like crystals that grow on the cannabis plant. These trichomes have the greatest amounts of THC and other cannabinoids and terpenes of any part of the plant. Trichomes are gathered and concentrated to create cannabis concentrates (including BHO, hash, and even kief).

The extracted liquid is then spread out to form a thin sheet of extract. Waxes, budders, and other sorts of concentrates are frequently blended, whipped, or shaken during the manufacturing process. This causes individual molecules in the extract to be agitated and results in a final product that has a hazy, possible creamy appearance and feel.

Because shatters do not shake during the heating processes, they have a translucent appearance. This is why it has a transparent appearance. Contrary to popular belief, the translucence of shatter has nothing to do with purity; rather, it is determined by how well the extract has been purged of its solvents and the quality of the cannabis used to produce it.

HOW TO USE SHATTER:

A dab rig is a device that uses water to heat and separate cannabis concentrates, such as shatter, creating a “dab” of concentrated THC. “Dabs” are short for “dabs,” which is another name for shatter and other types of cannabis concentrates. This is because the most popular technique to consume concentrates like as shatter, usually known as “dabs,” is with a dab rig. There are alternative methods available, though. Here are some ways you may utilize shatter:

Adding a little amount of shatter to a bowl, joint, or blunt is the simplest way to utilize it. You won’t have to buy any specialized equipment because of this.

However, if you want to get the most out of your extract, it’s not a good idea to mix it with flower.

The original purpose of Hash pipes was to smoke hash, charas, or kief. However, there are some contemporary pipes that may also handle solvent-based extracts like shatter. This would be the most cost-effective option for anybody seeking to try shatter alone rather than upgrading their vaporizer or buying a special dab rig.

The cost of a portable vaporizer can differ considerably depending on its features and quality. The majority of small vape devices will not function with solvent-based extracts like as shatter, but more recent and sophisticated vapes can handle flower, kief, and other types of extracts such as shatter.

Avoiding the bad effects of smoking while still enjoying the pure taste of concentrate and its uplifting qualities is best achieved by vaporizing shatter.

However, low-quality portable vapes have a hard time heating concentrates like shatter adequately and result in low-quality hits and a deformed flavor (particularly because they are battery powered).

It may be a little tough to find something that works well for both you and your better half, but we’ve done the legwork for you. When it comes to choosing the ideal vaporizer for yourself or your significant other, there are certain characteristics to consider. These include size, design, battery life, flavor quality, and vapor production.

Dabbing is the process of vaporizing shatter or any other concentrate on a heated surface (often known as a “nail”) and then breathing the vapors through an oil or dab rig.

Dab rigs are more complicated than bongs because they usually require a heater and flame, which adds to the rig’s overall cost. Water filtering elements such as those found in a conventional bong may be included, bringing the price of a dab rig from $50 to $5,000 or more depending on the features of the device and the glassblower who produced it.

WHAT ARE THE BENEFITS OF USING SHATTER?

Shatter is a remarkable new technology that allows both recreational and medical cannabis users to use and experience marijuana in an entirely new way.

A single hit from a dab rig, vaporizer, or hash pipe filled with shatter, for example, can provide recreational users an exceptionally powerful hit relatively quickly. This way it allows patients rapid and strong pain alleviation when they require it the most. 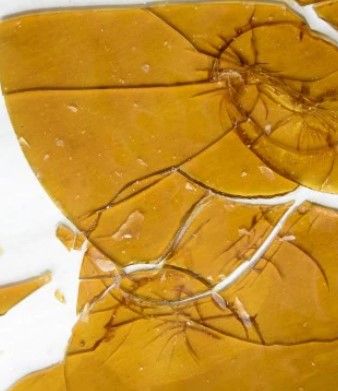 The dabbing trend is extremely polarizing. While some people like this new method of consuming cannabis, others are frightened by how it’s made, the potency of the product, and how it’s consumed.

BHO extracts are often utilized by consumers because of their beneficial health effects. Butane is a highly volatile and combustible substance. As we previously said, BHO production necessitates the substance to be heated in order for the chemicals to be eliminated from the extract.

Although professional extract producers working in legal markets such as Colorado and California have special equipment to safely handle butane, amateurs “chemists” have attempted to do so at home, resulting in explosions that caused significant injuries and even death. Another major issue surrounding BHOs like shatter is their strength.

Concentrates have a higher level of THC and other cannabinoids than flower. The highest levels of THC found in cannabis are found in the resins, which consist of approximately 60% to 80 percent THC. While there’s no way to die from cannabis intoxication, it’s considerably easier to lose control of your dosage with concentrates and end up face down in the toilet.

Finally, people are concerned about how shatter is consumed. Dabs are often called the “crack” of cannabis since to their appearance. Because of all these concerns, determining whether shatter is safe might be difficult.

You’ll find lots of CBD products on the market today. If you’re interested in trying it for yourself, make sure you buy it from a reliable brand and have someone walk you through the process of how to take it and especially how much to take.

One thing we’d want you to remember above all: don’t attempt to create shatter at home! No matter how much experience you believe you have.

The high produced by marijuana shatter is frequently characterized as “cleaner” than other inhaled methods of consumption since it does not require breathing in combusted plant material. This cleaner and more constant high is why many marijuana experts are switching to lab-manufactured concentrates. Shatter, for cannabis users looking to consume huge amounts of THC, provides high concentrations of this and other cannabinoids. While a particular powerful strain of flower might have THC levels around 25 to 30 percent, the THC content of shatter can be 80%.

In layman’s terms, shatter produces a strong high quickly. A single hit of high-THC shatter is more effective than smoking the whole joint. This can lead to rapid intoxication, couch-lock, dry mouth, and a sense of heaviness and relaxation.

The first concern when producing shatter is purity, and good handling and storage will guarantee that a high-quality shatter concentrate remains clean and debris-free. Medicinal concentrates are especially susceptible to dirt contamination owing to the strict requirements for medicinal formulations.

Consumers should always handle shatter marijuana concentrates with gloves or parchment paper to maintain them as clean and pure as possible. The oils and germs on their hands will be kept away by doing this. To prevent wasting the sticky residue that often remains when concentrates are picked up, always use a nonstick surface.

Regardless of the container in which it is stored, shatter will eventually soften and transform into budder. This will happen more quickly if it’s kept at room temperature or exposed to heat. To slow this process, the material should be kept in an airtight container in a cold, dark place. Non-stick containers are available specifically for crumble, wax, and shatter as well as other concentrates. The shatter may be prevented from adhering to the glass by combining it with parchment paper in an airtight glass jar.

It’s advised to use parchment paper to separate individual dabs for easier portioning while freezing shatter. Freezer storage may cause condensation to form. It’ll degrade faster as a result of moisture. To prevent condensation from forming, the storage container should be quickly dried after filling it with shatter.