Delta 3 carene (also known as alpha-carene or just carene) is the only aromatic molecule type in cannabis that can help form new bones and stimulate their growth, according to a study published in 2015.

Researchers began to recognize the therapeutic value of plant phytochemicals such as cannabis in the 1960s. Cannabinoids (including tetrahydrocannabinol (THC) and cannabidiol (CBD)), terpenes (such as myrcene and pinene), and flavonoids are just a few examples of these chemicals.

The cannabis plant is known to have several terpenes that are produced in tiny quantities during the plant’s development and ripen at different times. Terpenes were previously thought to merely convey a pungent odour in plants such as cannabis. From an evolutionary standpoint, these molecules serve the purpose of protecting the cannabis plant from predators and pests, many of which find these chemicals unpalatable or poisonous.

The Details of Delta 3 Carene

Delta 3 carene has a citrus, cypress, pine, and woody aroma. Plants other than cannabis, such as rosemary, pine trees, and cedar trees, produce it. Delta 3 carene is used in beauty products as a fragrance and as an insect repellent at the industrial level (it is present in turpentine).

The terpene works synergistically with the CBD to reduce inflammation, aid in bone healing, and enhance cognitive focus and concentration. Strains of cannabis rich in delta 3 carene have been found to help people suffering from arthritis, fibromyalgia, and even Alzheimer’s disease. This terpene is most prevalent in cannabis strains including AK-47, Arjan’s Ultra Haze, Jack Herer, OG Kush, and Super Lemon Haze. 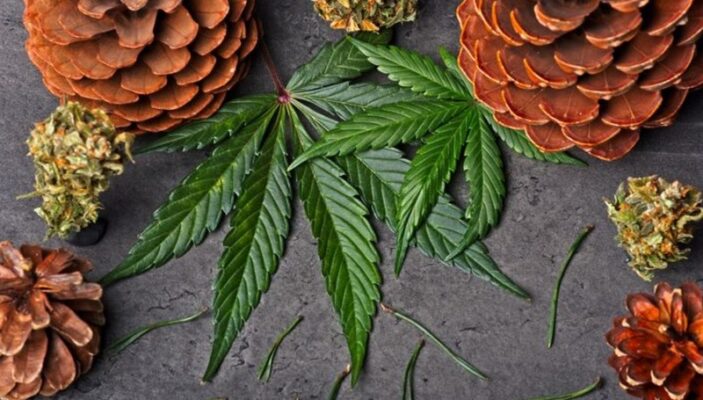 Apart from the repair of bones, the terpene is unique due to its capacity to draw liquids out (one of its main uses in the cosmetics industry). This drying impact makes it a good candidate for an antihistamine and products designed to reduce excessive menstruation or mucus production. This characteristic is also credited with anecdotal claims of cottonmouth (dry mouth) and red-eye among cannabis smokers and vapers.

The majority of cannabis strains have a low carene content. Pine trees are the major source of carene extracts. The following plants, trees, herbs, and fruits naturally contain carene terpenes::

There is a lack of clinical research on carene’s medicinal value and health benefits in humans. The majority of studies on this terpene have been conducted using animal or cell-culture models. Early research, on the other hand, suggests that carene has several potential advantages. nWhile carene’s effects vary from person to person, they are generally positive.

In a 1989 experiment, researchers examined the anti-inflammatory properties of Bupleurum gibraltaricum Lamarck essential oils derived from the fruiting apex. The Cázulas mountains, Quéntar Reservoir, and Balcon de Canals in Granada Province were used to collect essential oils. “Essential oil from the Cázulas mountains was most effective against acute inflammation due to its high delta-3 carene content,” according to the study.

In a 2007 research, researchers looked at the effects of 89 natural chemicals on bone healing and disease in mice. In cell-culture and animal models, essential oils containing carene promoted mineralization (adding calcium to bones) according to researchers. Carene may play an important role in bone metabolism, osteoporosis therapy, and maintaining good bones.

If you’re looking to reap the usefulness of the delta 3 carene terpene, the following strains/cultivars feature its unique herbal aroma and potential benefits:

Delta 3 carene has a sweet, pungently herbal, and earthy scent similar to that of citrus, cypress, and pine. It also contains undertones of citrus and acidity. Delta 3 carene is naturally produced in pine and cedar trees as well as herbs such as basil, rosemary, and peppers.

How does delta 3 carene help bones?

Low doses of delta 3 carene, according to one study, stimulate the re-mineralization of bones by stimulating the expression of proteins such as collagen that contribute to bone repair. Delta 3 carene improved bone health in animal subjects when used in their diets, suggesting that it may be useful in treating bone disease and promoting healthy bone structure.

Delta 3 carene has a wide range of medicinal applications, making it useful in the treatment of hundreds of diseases and conditions, including those linked to or caused by inflammation, neurodegeneration, or bone disease (including bone injuries). This terpene has also been found to exhibit antifungal activity.

The four dominant potential medicinal benefits of the delta 3 carene terpene are:

Delta 3 carene’s ability to function as a drying and reducing agent against bodily fluids such as menstrual blood, mucus, sweat, and tears is one of the most notable medical effects. This property is also why certain cannabis strains high in this terpene have earned a bad reputation for producing dry mouth.

To draw out liquid and treat or improve skin, the cosmetics industry incorporates delta 3 carene in many topical product formulations. Delta 3 carene is also utilized as an antihistamine and for health items designed to reduce mucus production by drying.

Delta 3 carene’s powerful anti-inflammatory effect is of greater importance to most patients. This terpene, alone, has the potential to be a therapeutic treatment for a wide range of illnesses including arthritis, fibromyalgia, multiple sclerosis, and many others associated with joint discomfort or pain caused by inflammation.

Delta 3 carene’s capacity to induce or support neurogeneration and neuroprotection is another significant advantage. This produces enhanced memory (including improved recall) and superior cognitive functioning, making this terpene potentially useful in the treatment of dementia disorders, such as Alzheimer’s disease and Parkinson’s disease.