Let’s look at trichomes in further detail, starting with CBD vs. THC trichomes, their significance, and the many different types. However, first let’s go through some fundamentals.

Where does CBD come from?

The seeds of the hemp plant are crushed to release the fatty acids, which are then extracted and refined into extracts such as CBD. The flower trichomes in particular. It can also be found in small amounts in the leaves, stems, and seeds of the plant. Hemp oil is made from hemp seeds and has numerous health advantages, but it does not include CBD naturally.

The Terpenes, Flavonoids, and Cannabinoids found in the flower’s trichomes make up a Full Spectrum Hemp Flower Oil. The Entourage Effect is the combined effect of Terpenes and Cannabinoids.

The Cannabis plant does not create THC or CBD on its own. The plant forms cannabinoid acids, including CBGA, THCA, and THCVA (among others), which must be activated through decarboxylation to create CBD.

Where Does THC Come From?

Cannabis indica and cannabis sativa produce a lot of resinous trichomes. These trichomes include high amounts of THC. When hemp is cultivated, plant trichomes will still have some THC, albeit in very low doses. (For regulatory reasons, 0.3 percent or less).

THC may be found in all parts of a marijuana plant’s aerial structure, but it is most concentrated in the flowers of female cannabis plants. These flowers are frequently covered in tiny resin glands known as trichomes, which form a glistening coat.

Many people believe that since marijuana and CBD are both derived from the same plant, they would intoxicate them. That’s not the case. THC is the main psychoactive ingredient in marijuana, which makes you feel high. CBD, on the other hand, consists of a high amount of terpenes and a tiny amount of THC. This implies that after eating CBD items, you will not be intoxicated or high.

The terpenes in CBD make it a potent insect repellent. Because CBD has a high proportion of terpenes, it also contains trichomes, which protect the cannabis plant. The unpleasant flavor of CBD tinctures and CBD oil is frequently caused by trichomes.

Trichomes guard against pests and insects by emitting a smell that repels them. They have resin glands that release a variety of oils, which keep bugs at bay. Trichomes are usually found on the following plants:

The existence of trichomes in full-spectrum CBD products helps to alleviate depression and anxiety, reduce joint pain, enhance your quality of sleep, and decrease inflammation. They are able to provide so many advantages owing to the presence of trichomes.

The trichomes also produce terpenes and cannabinoids. Terpenes and flavonoids are necessary for CBD’s effectiveness. When you purchase a CBD product, look at the amount of terpenes, flavonoids, and cannabinoids in the list of ingredients. The greater the percentage, the more powerful the solution.

Tanasi is a marketplace for a wide range of full-spectrum CBD goods. You can expect to find almost every kind of CBD product, from CBD tinctures to CBD gummies, at reasonable costs. 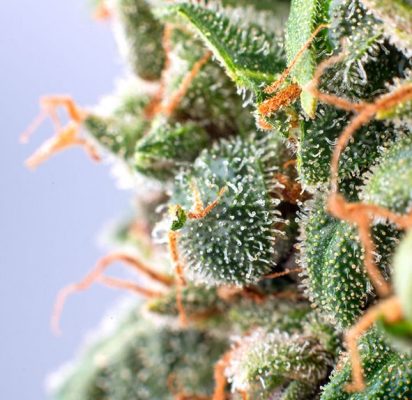 CBD Trichomes vs THC Trichomes: Why are Trichomes Important?

The entire marijuana plant, as you know, includes cannabinoids. The trichomes of the plant are where you’ll find the most concentrated active components. As plants bloom and trichomes form, cannabinoid synthesis begins in these hair-like extensions. And

Cannabis-derived cannabinoids can interact with your ECS to produce beneficial effects since they are chemically similar to the endocannabinoids our bodies naturally make.

Terpenes are responsible for the aromatic variety and flavor of cannabis. Terpenes also interact with cannabinoids to enhance their natural balancing qualities, known as the “entourage effect.” These terpenes adhere to ECS receptors in much the same way as cannabinoids. They activate a wide range of effects via activation of ECS receptors. And they may have an impact on how your body releases or processes serotonin and dopamine.

The compounds found in plant foods that produce a fruity flavor, fragrance, and hue are known as phytonutrients. They also collaborate with terpenes and cannabinoids to promote a wide range of medical potentialities. We refer to unique cannabis flavonoids “cannaflavins,” and research suggests they may aid in health. 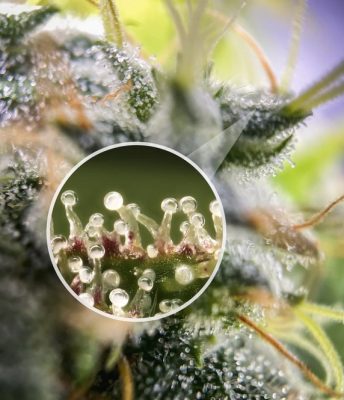 Trichomes may be divided into two categories: glandular and non-glandular. (We also refer to the latter as cystoliths.) These are the key differences.

Glandular trichomes are tiny crystals inside the head of a glandular plant. They release substances into their “brain,” or gland, in simple terms. Cannabis plants typically have three distinct types of trichomes. The following are some of them:

They are tiny, pointed features that may be found on the entire surface of the cannabis plant. They’re the tiniest trichomes and aren’t discernible to humans. It’s been said that they’re responsible for producing cannabis resins. The capitate-sessile bulbous is the next size up.

Are you looking for a way to get high without smoking cannabis? Waxes, oils, and fats are the most commonly used extraction methods. They’re both the most plentiful and biggest in terms of size. (And they’re the only ones you can see with your naked eye.) They usually grow on the surface of flowers rather than leaves. The mushroom-shaped stalks generally develop during the blooming phase of plant growth. Then, when the plant releases terpenes and cannabinoids, they have a key function to play. Because of their visibility and function, capitate-stalked trichomes are frequently identified throughout harvesting. 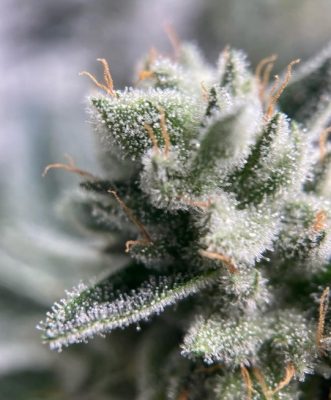 The absence of glands on these trichomes, as you may assume, identifies them. They do not contain cannabinoids or other most important components. Despite this, they still have a number of applications and shouldn’t be overlooked.

Mulch protects plants from heat, dampness, and sometimes predators by shielding them from the sun and rain. They begin as small patches on the seedling and eventually appear beneath the leaves. Their name implies that they are single-celled, which means you can’t see them without a microscope. When you examine them more carefully, you’ll notice a resemblance to tiny hairs.

They also start developing quite early in a marijuana plant’s existence. Although they appear to be the same size as their unicellular counterparts, they are larger and have an unusual outgrowth on the cell walls. This generally implies that they have a coarse feel about them; it is thought to safeguard the young plant from pests and herbivores by providing protection against predators.

No doubt continuing research is shedding light on the medical benefits of THC and CBD. Hopefully, this article has shed some light on where you can find these phytocannabinoids in various species of cannabis plants.

CBD-based products and CBD oil have seen a tremendous increase in popularity in recent years. The presence of such goods has resulted in a large number of people looking for information about them and gaining a better understanding of them.

Some very basic inquiries are asked, especially regarding the ability of these goods to provide health benefits to consumers. THC is more prevalent in cannabis indica and sativa species than it is in industrial hemp, as we’ve seen. CBD and THC are both present in cannabis aerial parts; they’re not found in the seeds or roots.

Hemp does not contain THC in significant amounts, with the exception of high-THC strains. Marijuana species’ resinous capitate-stalked trichomes on the female plants’ flowers generally have a lot of THC.