What is sticky weed, and why do some cannabis users prefer it? What distinguishes sticky buds from dry buds? What factors influence the THC content of marijuana?These and other inquiries will be addressed in the sections that follow, as they’ll explain why dank, high-quality, sticky buds should be added to your regular marijuana supply.

What Is Dry Cannabis?

When we talk about dry cannabis, we’re talking about cannabis plants that have been dried and cured after being plucked. After the branches are hung upside down and allowed to dry fully, the THC is gathered from the tips of the buds. The curing process, on the other hand, involves further drying of buds to enhance cannabinoid content. Drying and curing help prevent bud rot and mold while extending your marijuana’s shelf life.

Dried buds are ideal for decarbing and creating cannabis oil or cannabutter for marijuana edibles, but they’re frequently considered a low-cost option for better quality, sticky buds. Dry cannabis isn’t necessarily mids or reg weed; dry weed might also be high-quality. It’s all about your personal taste and preference when it comes to buying dried buds vs. sticky buds. 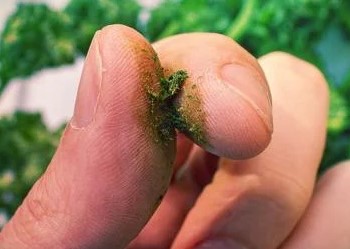 What Is Sticky Cannabis?

When we say “sticky weed,” we’re referring to the juicy, sticky flowers that indicate you have high-quality cannabis in your hands. THC and resin are the most common cannabinoids found in nuggets.

Female cannabis plants produce the flowers on the plant, commonly known as cannabis buds. When fully developed, they can become orange or purple and contain both psychoactive and non-psychoactive cannabinoids. So let’s look at each part of the cannabis blossoms to see which ones make it sticky.

The cannabis plant’s pistils are tiny hairs (stigmas) that belong to the female reproductive system. Pollen from male plants is gathered by the stigmas in order to produce new cannabis seeds. Stigmas are an easy way for a marijuana grower to tell when their crop has completed its development and is ripe for harvest. They become dark amber once the plant has finished developing and indicates that it is time to harvest it.

The bract, which houses the female reproductive organs and is covered in resin glands, surrounds the ovule. The translucent layer that covers the ovule at the bottom of the flower is instead covered by the calyx.

Cannabinoids are chemicals contained in the cannabis plant that bind to cannabinoid receptors in the brain and other tissues. The following are some of the most well-known ones:

Cannabinoids may be divided into two categories: those that are psychoactive and those that are sedative or anti-inflammatory. The cannabinoids are produced in the resinous glands of marijuana plants’ trichomes.

The sticky quality of cannabis comes from the resin-producing trichomes on the plant’s flower. The cannabis plant, along with cannabinoids and terpenes, provides a euphoric experience as well as the ability to cure several medical problems and illnesses.

Sticky weeds are great for smoking or extracting cannabis oil, and they’re popular among marijuana users. People frequently buy these higher-end resinous strains to use for pleasure as a way to unwind after a stressful day at work, or therapeutically to alleviate nausea, induce hunger, reduce anxiety, and ease depression.

Which Is Better, Sticky Weed or Dry Weed?

If you’re wondering whether to go for dry or sticky marijuana, consider what you’ll be utilizing it for. Dry weed has a sandy texture, while sticky weed has a wet texture; as a result, they’re utilized differently.

Dry strains are typically less expensive than sticky resinous marijuana, although this varies by location. Dry weed is also great for making edibles and cannabutter or cannabis oil.

Sticky strains, on the other hand, deliver a better high and may even satisfy the most demanding cannabis consumers. They are, however, more expensive.

If you’re concerned about damaging the quality of the marijuana by combusting it at high temperatures, a vaporizer is the way to go. They allow for uniform combustion and don’t burn the cannabis any more than necessary, which isn’t always the case when smoking bongs, joints, buds, or pipes. Vaporizers enable you to extract more cannabinoids while also producing a greater experience.

To summarize, whether you’re looking for your next cannabis experience or just want to know more about it, sticky and dry weed will get you high. The price range and quality of the marijuana are the differences between them.

Dry weed is a cost-effective option when purchasing large amounts of marijuana, such as for a small gathering. It’s best utilized for cooking edibles because it may be easily transformed into a powder. Because it can readily be made into a powder rather than being sticky, it’s ideal for making edibles, therefore it’s mostly used recreationally.

If you can afford it, go for sticky marijuana – or at the very least try it since it’s worth the money. Dry cannabis, on the other hand, is a wonderful way to save money on your recreational cannabis purchases. You may genuinely get high-quality dry weed without spending a fortune.