Dry Sift Hash is a potent concentrate made by slowly passing cured cannabis through sifters with gradually smaller mesh sizes. This picks up the trichome glands, which are then collected. Dry Sift Hash is one of the least expensive concentrates to make, but it requires significant skill and painstaking workmanship. It can be used on its own or mixed with tobacco or other buds for an extra kick.

What is Dry Sift Hash?

Dry sift is a type of concentrate that gets its name from the trichome glands that make it up. These glands have a soft, sand-like texture and appear dry. Dry sift is not considered an extract because no solvents are used to remove the trichomes from the plant material – they’re mechanically removed instead. You can make dry sift at home by sifting and filtering plant matter through a screen, but commercial manufacturers use industrial vibratory filters to process larger quantities of cannabis.

The trichome glands are the tiny appendages on a marijuana plant’s surface that produce terpenes and cannabinoids. You might compare trichome glands on cured plant material to ripe apples dangling from trees. The quickest method to get rid of those apples would be to shake the entire tree, allowing the fruits to fall to the ground. Shaking the tree applies mechanical energy, which allows the apples to break away from it and fall to the ground. To avoid any unpalatable “contaminants” slipping through, it’s important to shake the tree hard enough so that most of the apples fall off. Doing so will also cause some branches to fall, but you can easily catch them using a screen with holes that are only as big as the apples. 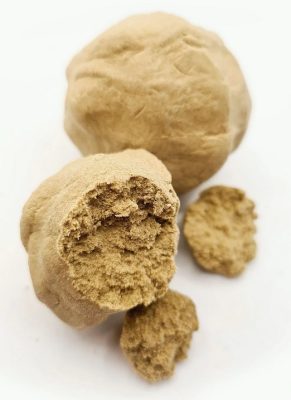 Dry Sift Hash is made by agitating plant material over a screen with varying sizes. The glands of trichomes will fall through the holes in the corresponding sized screens while holding back any plant matter that would reduce purity. Trichome glands have diameters ranging from 20 to 120 microns, which can be filtered with different types of screens.

The larger micron sizes capture the entire capillary-stalked trichomes (90- 120 microns), while the smaller micron sizes (20-40 microns) isolate the glands from the stalks.

The amount of impurities in Dry Sift Hash largely depends on the size of the sifting screens, how much dry sift is produced per run, and moisture remaining in the plant material. To get higher-qualityHash, “carding” can be employed; this involves gently rubbing hash over small mesh screens with a card. Another option to increase purity is pressing lower-melt rosin into sift.

Dry Sift Hash, like any other type of cannabis concentrates, has advantages and drawbacks. One of the most significant benefits of Dry Sift Hash is that it’s produced by a solventless method, which preserves the whole trichome gland and generates a full-spectrum concentrate. The cost of producing Dry Sift Hash at home is also minimal.

While Dry Sift Hash is inexpensive to produce, it is time- and labor-intensive. It’s possible that it has a greater amount of plant contaminants than solvent-based extracts. These impurities are not dangerous in and of themselves, but they do decrease the likelihood of obtaining a dabable concentrate.

How to use Dry Sift Hash

You can easily press 5 or 6 starі kief into a dabble hash by placing it in between two pieces of parchment paper and pressing it down with your hand. Three to 4 star Dry Sift Hash is great for sprinkling on top of flower, adding to a joint, or blunt wrap. If you enjoy smoking hookah, dry sift hash can also be added to hookah coals for an extra flavor boost. Any product categorized as 1or 2 stars is usually used for making edibles.

How to store Dry Sift Hash

Depending on the consistency, concentrates are typically stored in a glass or silicone jar or in parchment paper. Jars work great for short-term storage of kief, especially when kept in the refrigerator. For long-term storage, kief should be vacuum-sealed and kept in a glass container in the freezer.

At-home Dry Sift Hash making has two primary choices: a set of sifting screens or a tumbler. Sifting screens can be purchased separately or as part of a siftbox, which wraps, stacks, and separates the screens for full effectiveness within a clean, enclosed box. A mesh cylinder or drum that holds plant material and sifts it when turned is known as a tumbler, generally accompanied by a container or flat catch surface where the Dry Sift Hash may accumulate.

With the necessary equipment in hand, here is how to sieve your plant material and harvest the precious trichomes:

Note: Agitating the material requires a delicate balance. Too much force can increase the amount of particulates that make their way into the final product.

What micron screen is best for kief?

The micron sizes of a filter screen’s openings are measured. Hash makers use screens with varying micron diameters to capture the trichome heads and separate them from the rest of the plant. The diameters of trichome glands range from 20 to 120 microns, corresponding to the most frequent screens.

The larger micron sizes capture the entire capillary-stalked trichomes (90- 120 microns), while the smaller micron sizes (20-40 microns) isolate the glands from the stalks.

The purity of Dry Sift Hash largely depends on the size of the sifting screens, the technique employed throughout the process, and the moisture content of the plant material. 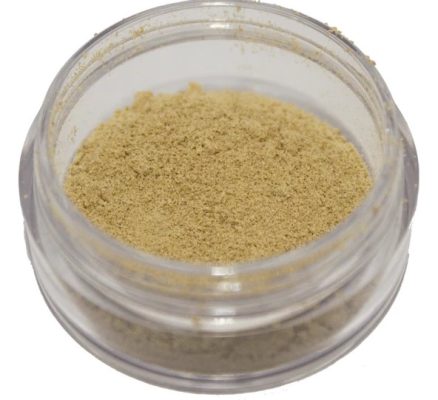 Can you Dry Sift Hash with bubble bags?

The process of breaking off and turning to bubble hash using dry sift bags is straightforward. In order for the trichomes to fracture and result in a high-quality bubble hash, you’ll need two five-gallon buckets and pre-frozen plant material. When it comes Dry Sift Hash vs. bubble hash, drying sift hashing is a somewhat easier technique than producing bubble hash. The goal of Dry Sift Hashing is to separate the kief from the rest of the plant material using kief screens, as you would with Dry Sift Hashing. Bubble hash, on the other hand, works with water, ice, and bubble bags in order to produce a distinct flavor due to an increased level of terpenoids and flavonoids.

What temperature should I press Dry Sift Hash?

Generally, oil extraction works best at a temperature between 170 and 230 degrees Fahrenheit. In particular, the lower end of this range is better for Dry Sift Hash while the higher end produces better results for flower extracts.

The quality of solventless concentrates is commonly determined by how well it dissolves. Manufacturers use a star system to evaluate hash quality. Although there isn’t one specific way that everyone uses, the six-star rating method is preferred by many in the industry. This technique is also effective for differentiating your Dry Sift Hash based on purity or quality grade levels. A melt falling within the one- to two-star range would be considered cooking-grade hash because there tends to be higher concentrations of plant matter present. A three- to four-star “half melt,” or a lesser grade hash that only melts halfway, is referred to as a “melt.” A five- to six-star “full melt” is the most pure form of Dry Sift Hash that can be dabbed on its own.

While the six-star rating system for Dry Sift Hash is subjective, it’s still a reliable way to identify pure quality. The higher the rating, the better your kief will melt and fewer plant contaminants it will have.