Marijuana smoking has been linked to damage to the lungs, according to health professionals. Marijuana use has been well studied over time’s harmful influence on the brain. However, while more study is required on the possible beneficial and/or damaging effects of marijuana on eyesight, we do know that it possesses a few key functions.

The most apparent effect of smoking marijuana is red eyes, which appear after a few minutes. Marijuana’s THC (tetrahydrocannabinol) dilates blood vessels and encourages blood flow throughout the body, lowering blood pressure. As a result of this, the veins in the eyes grow larger, causing either redness or bleeding eyes.

Although cannabis has been known to cause short-term and long-term damage to vision, researchers are still studying the harmful effects of cannabis on peripheral vision, eye pressure, and visual processing. Marijuana usage may lead to a lot of damage in these areas. 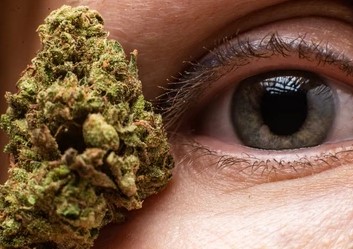 Some individuals are concerned about the possible benefits of cannabis on persons with glaucoma. Glaucoma is an eye disease in which the eye pressure has risen. While marijuana reduces eye pressure, it does so for only a short time. Because marijuana has an impact on people’s abilities to focus, make judgments, drive automobiles, operate heavy equipment, and other activities, it is not yet used as a treatment for glaucoma.

How Does Cannabis Affect the Eyes?

Marijuana may help you look at things from a new perspective, according to studies. Cannabis has been shown to impact every organ in the body, including the eyes, according to research.

Cannabis chemicals bind to one of the most extensive cell communication networks found in vertebrates, the endocannabinoid system (ECS).

The ECS is activated by chemicals in cannabis, which bind to a distinct type of cell receptor known as cannabinoid receptors. According to studies, the human eye has a high density of CB1 cannabinoid receptors. The vision processing centers in the brain contain a substantial number of these landing sites. Furthermore, animal research shows that the ECS is vital for our eyesight.

An electroretinogram, which is a test used to assess visual evoked potentials, records the electrical response of the eye to a light stimulation. According to the researchers, cannabinoid receptors influenced the eye’s sensitivity to light.

The impact of cannabis on vision has yet to be investigated. However, this preliminary research adds to the evidence that cannabis should be researched as a therapy for ocular diseases.

Cannabis has already resulted in a variety of eye ailments. While some are beautiful, such as enhanced night vision, not all of the effects are pleasant. It is not uncommon to experience the following symptoms shortly after smoking cannabis:

While red eyes are not always a favorite cannabis side effect, they can be. While red eyes may be an indication that you’ve used marijuana, those who suffer from eye strain may benefit from the herb’s soothing properties.

Cannabis has been proven to lower blood pressure. As a result of this, capillaries and veins dilate, resulting in what is commonly known as red eye.

Wider capillaries allow blood to enter the eyes, lowering eye pressure. This is sort of eye relax for people who have painful ocular issues such as glaucoma. Chronic stress or other causes might cause irritated or damaged eyesight, which this may be beneficial for.

Some individuals who smoke marijuana experience an eye allergy after. This might be caused by smoking, molds, or even cannabis itself. ITCHINESS, REDNESS, INFLAMMATION, TEARING, AND DRYNESS ARE ALL SIGNS OF ALLERGIES.

According to a 2015 research by the American College of Allergy, Asthma, and Immunology, cannabis allergy is similar to hay fever in that sufferers experience eye irritation and a itchy nose after being exposed to smoke, pollen, or plant material. 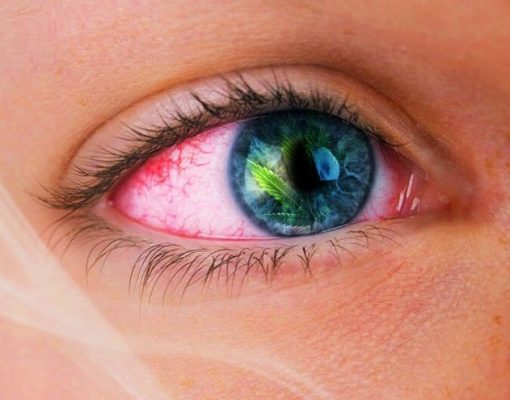 Cannabis has been shown to have a variety of health benefits, including the treatment of pain and inflammation. Researchers have long wondered if cannabis might be beneficial for night vision. In the 1990s, M.E. West, a pharmacologist, observed that Jamaican fishermen who took a cannabis tincture had an “unusual” ability to see in the dark.

The researchers feel that lotion is the best mode of delivery for THC. According to one research, a single big dose of THC delivered via lotion has the same psychoactivity as many smaller doses taken numerous times over time. The second approach to increase your chances of getting an RCD is to gradually increase your usage over time. This may be tough due to its adverse effects, but doing so will improve your quality and quantity of life during this stage in the game (which might lead to faster healing).

Endocannabinoids may also aid in the maintenance of good eyesight. The endocannabinoid system has been linked to visual development in the brain in recent research.

According to a study from the University of Waterloo, children who were exposed to marijuana in the womb had significantly greater visual processing skills. In comparison with babies who ingested alcohol, those who were cannabis-exposed showed improved global motion perception.

This is not meant to encourage pregnant women to use cannabis, but it does contribute to the case that cannabinoids and the ECS improve eye and brain processing of visual information.

Cannabis has the ability to have various eye consequences. While more research is needed on cannabis and eye health, there is now evidence to suggest that it may aid in the treatment of a variety of eye problems.

These illnesses are some of the most common causes of death:

Aside from their intoxicating effects, cannabis plants have been shown to contain powerful antioxidant compounds that might help to protect against a variety of conditions including glaucoma. Glaucoma is an optic nerve disease that damages and causes blindness in millions of people throughout the world.

Scientists have been researching how marijuana affects glaucoma since the 1970s. In a study of 16 human participants, inhaled cannabis was found to be helpful in lowering eye pressure, which causes discomfort and damage in this disease.

Cannabis relieved discomfort for three to four hours in all patients. People with high blood pressure and glaucoma experienced the greatest and longest benefits. These findings were replicated by studies conducted in 1980 and 2000.

In 2014, researchers published a study in Experimental Eye Research suggesting that cannabis medicines may be able to treat degenerative blindness. Cannabis compounds protected retinal cells from dying in individuals with retinitis pigmentosa.

Rodents were used in the study. For 90 days, rats were given a synthetic cannabinoid in their food. After three months, the researchers checked to see whether the animals’ blindness had worsened.

Rats who received the cannabinoid had 40 percent more photoreceptors, according to a recent study. This is strong evidence that cannabis-based medicines may help to prevent ocular degeneration and neurodegenerative blindness.

In other studies, the plant has been found to include powerful neuroprotective antioxidants, which may help with a variety of age-related illnesses, not just blurred vision.

CBD has been shown to help protect the eye by reducing some of the toxicity in it, according to researchers. A recent research has made headlines on the internet, claiming that long-term cannabis use causes damage to the retina. However, this 2006 study found that certain cannabis chemicals might actually prevent retinal degeneration. Perhaps all you need is how you consume marijuana.