Psilocybin mushrooms that occur naturally contain the psychoactive compound psilocybin. Over 180 mushroom species containing psilocybin are found globally and can cause psychedelic effects when eaten. The active principles in magic mushrooms are psilocybin and psilocin, which are produced by the body. These chemicals exist in small amounts in other components. Baeocystin and norbaeocystin are but a few of the compounds that may be found in relatively low quantities.

The tiny and powerful liberty cap mushroom (Psilocybe semilanceata) is the most well-known species in Europe. Other kinds exist in the wild, and Psilocybe cubensis is cultivated indoors.

Although psilocybin is responsible for the psychedelic effects of all ‘magic mushroom’ types, different strains of psilocybin mushroom can produce diverse sorts of psychedelic experiences, and scientists are still exploring how these effects vary in kind and intensity over time. 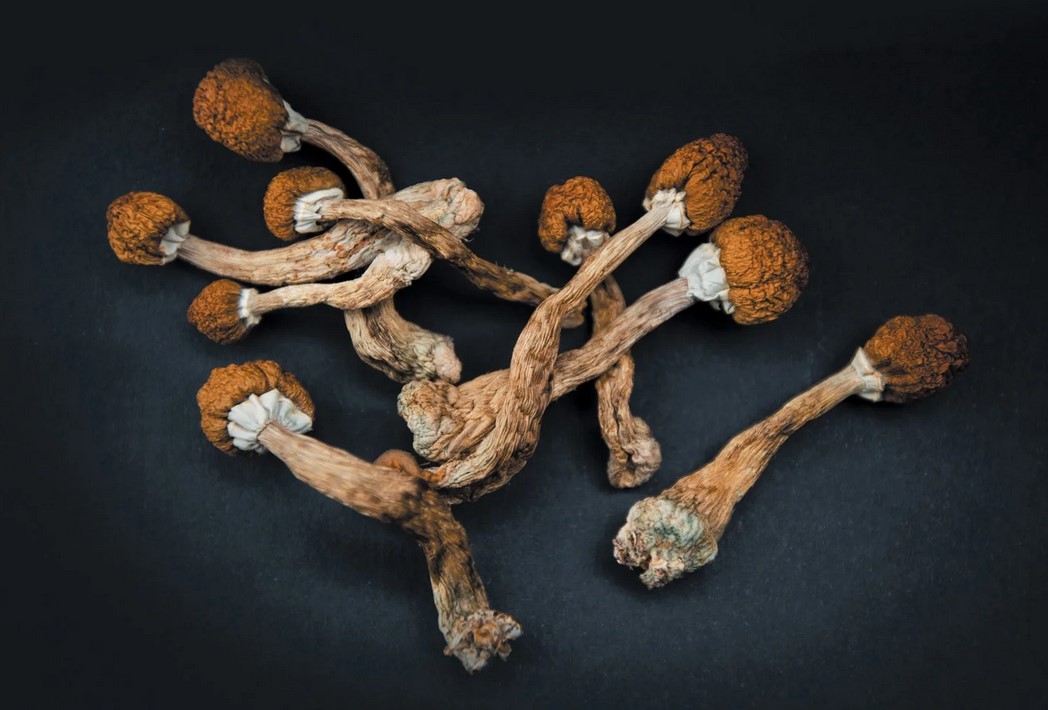 What are the different forms of psilocybin mushrooms?

Magic Mushrooms grow on the ground or are cultivated from mycelium spores, making them naturally occurring. Psilocybin mushrooms occur naturally all over the world and some people have been known to forage for them. However, picking psilocybin mushrooms yourself can be hazardous. There are at least 10,000 different types of fungus, some of which are deadly to humans. It is easy to conflate one mushroom with another and pick one that will make you comatose rather than induce a psychedelic experience if you don’t know the various sorts, species, or dangers of various mushrooms.

Mushrooms are largely water and, when dried, lose about 90% of their mass. This indicates that the same quantity of magic mushrooms in a dried form will be 10x less heavy than a fresh one.

Mushrooms that haven’t been properly dried can rot rapidly if water isn’t removed from them when they’re picked, destroying not only the mushroom itself but also the psilocybin within. Eating rotten magic mushrooms is never a smart idea because the mould will induce severe stomach problems without providing any psychedelic effects.

Because magic mushrooms are illegal in most countries, the market for them is illicit and unregulated. This means that there is a danger in purchasing any kind of magic mushroom (fresh or dried), as you will not know exactly which strain you are purchasing unless you are an expert. There are many different types of psilocybe mushrooms, some stronger than others. If you consume what you believe to be a weak strain but it turns out to be a different or stronger variety, unexpected and unpleasant effects may occur.

Due to the fact that it is easier to add impurities to powder, powdered magic mushrooms carry more dangers than fresh or dried varieties. When you purchase psilocybin in this form, you run the risk of receiving a product of unknown and potentially dangerous origin.

It’s crucial to understand that natural products’ potency can differ significantly even within the same species and across regions. Psilocybin mushrooms are ingested in various ways: fresh or dried, for example, brewed into a tea,, blended into food, ground-up or just eaten as is. Since mushrooms are almost entirely water, 10 times the amount of fresh mushrooms will be needed to achieve comparable effects as dry ones. Microdosing psilocybin has become increasingly popular lately but there isn’t much scientific research on microdosing at this time. 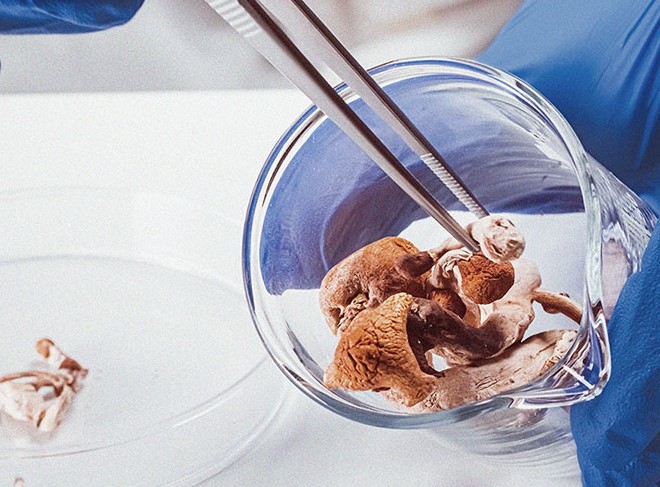 How does magic mushrooms work as a drug in the body and brain?

Psilocybin and psilocin are psychedelic tryptamines with a similar chemical structure to serotonin, which is a vital biochemical messenger. Serotonin has many significant functions in our brains and digestive systems, such as regulating moods, sleep cycles, and stress-coping mechanisms.

Psilocybin, on the other hand, binds to the same receptors as psilocin (especially 5HT2A at one receptor location), making the two similar in chemical structure. This receptor is involved in a wide range of functions, including mood, creativity, learning, and perception.

A notable number of 5HT2A receptors are situated in cells within the cortex; an area relating to reasoning and logical thought. These cells length is considerably longer than other types of brain cells, thus they have a greater impact on brain activity.

Psilocin interacts with these receptors to produce the desired effects of hallucinogenic mushrooms, which can include changes in mood, creativity and perception. Newer studies have also shown that psilocin has an effect on the Default Mode Network (DMN) portion of the brain.

Our DMNs, or brain’s major information highways, serve several purposes. They act as data gathering and consolidation centers while we go about our daily lives. They also allow us to “travel” in our minds and think back to the past, allowing us to plan for the future. Some believe that our DMNs house our personalities; that they contain our senses of “self.”

Psilocin disrupts one or more of the DMN’s “connector hubs” for a while. This temporary shutdown of our brain’s main information highway prevents the brain from communicating with various parts as it normally would and instead forces it to connect in ways that it does not usually. This implies that, under the influence of psilocin, the brain begins communicating with components of itself that it seldom talks to, which leads to new connections being formed.

We have not yet discovered all the ways psilocin affects the brain, but researchers are still trying to unlock its secrets. 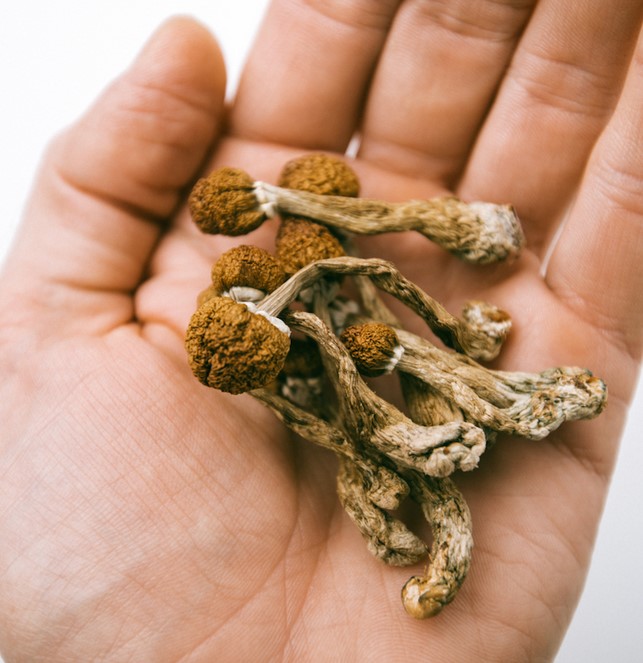 What are the effects of magic mushrooms?

Magic mushrooms, also called psychedelic or ‘magic’ mushrooms, can induce changes in a person’s state of consciousness. These changes may manifest as alterations in mood, perception and sensory experience. A psychedelic ‘trip’ caused by psilocybin typically lasts between 2-6 hours. The intensity of the trip is directly proportional to the amount of mushroom consumed and its strength in terms of psilocybin content.

Psilocybin is well-known for having a mind-opening effect, and sensory experience can become very vivid under its influence.

This implies that psilocybin may make visually appealing things (art, nature, music, etc.) far more beautiful than when sober, but it can also imply that ordinary sense perception can become overwhelming. Being in a congested area like a street or a club might be tough since the sheer amount of sensory information may easily overwhelm the mind and senses. For the best psilocybin experience, you should be in a comfortable and familiar place with little to no sensory input. This could be at home or outside in nature.

The key effects of the experience include thinking in innovative, interesting or unorthodox ways; having emotions more intimately linked to sensory experiences; redirecting your gaze inward toward your own emotions or moral compass; experiencing time dilation; seeing and hearing things that aren’t really there; and at exceptionally high doses, losing all sense of self.

Psilocybin seems to connect parts of the brain in new and interesting ways, which can lead to different, fascinating, odd and sometimes scary thought patterns. There is little one can do to predict how a psychedelic trip will go, so it is best to ensure a positive mindset and comfortable setting beforehand.

Hallucinations can occur after taking a magic mushroom and might include changes in hearing, closed-eye images, and open-eye visuals.

When you shut your eyes, the visuals you see can go from fractal designs and intense colors to living out scenes that feel like dreams. And if you keep your eyes open, hallucinations of your surroundings might occur–like the colors around you becoming more saturated or distinct patterns forming before spinning or shifting as you look at them. If higher doses are consumed, objects and places may change entirely and things that don’t exist in reality could be experienced.

Auditory hallucinations can include things such as sounds becoming more clear, crisp, or complex in meaning. The appreciation of music or words/language may also alter.

Doses that are too high can result in ego death, an experience where your sense of self disappears. This can be frightening, strange, or enlightening–or some combination of the three. Unless you’re very familiar with how LSD affects you, it’s best to avoid taking such a high dose. 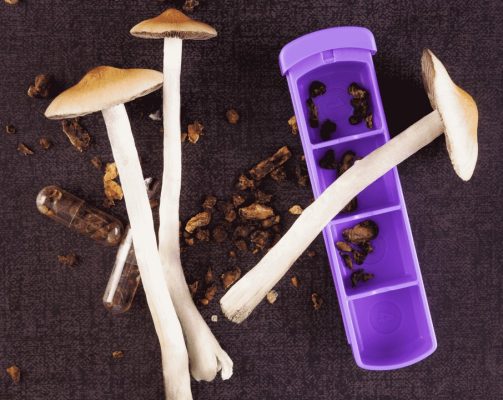 Do magic mushrooms have medical uses?

Magic mushrooms may be used in the treatment of mental illnesses and disorders such as depression, anxiety, alcoholism, and post-traumatic stress disorder (PTSD). They also have potential therapeutic uses for things like psychotherapy and grief.

Many studies, most notably by David Nutt and Imperial College, London, have found magic mushrooms to be highly effective in treating depression. In fact, from as little as one controlled psilocybin experience, subjects commonly report a decrease in their symptoms of depression.

Although there is a lack of evidence, some studies propose that microdosing psilocybin (a minuscule amount in comparison to what would be needed for psychedelic effects) could help treat conditions like migraines and cluster headaches. Despite the potential benefits, more research needs to be conducted in this area.

Only doctors who are licensed to practice medicine may administer psilocybin for medical purposes. You should not attempt medical usage of psilocybin on your own.

Research on psilocybin therapy has continued – for more in-depth information on the medical applications of psilocybin, based on clinical studies, see below.

How addictive are psilocybin mushrooms?

Mushrooms containing psilocybin have not been demonstrated to be addictive in humans. There are no documented cases of people becoming dangerously addicted to mushrooms.

Psilocybin has not been shown to modify the level of any natural neurotransmitters or the activation of neural receptors via use of the brain’s existing supply of neurotransmitters, as cocaine or MDMA do.

Psilocybin molecules, on the other hand, appear to modulate their effects by binding to and activating 2A serotonin receptors while leaving the brain’s existing supply of serotonin unaffected. This prevents the possibility of neurotransmitter upregulation or downregulation, which means that there is no risk of physical dependence.

Magic mushrooms have a high tolerance level, meaning that users who consume them one day would not have the same reaction if they consumed the same amount the next day. The body’s ability to create a tolerance quickly means that there is little potential for addiction.