A purple-colored cannabis plant is one with a hue of purple or purples. Water-soluble pigments called anthocyanins are the cause of most colorations. Indica buds are linked to these wine-colored blooms, implying they may make you sleepy and calm down.

Today, consumers can buy a variety of purple cannabis strains from their neighborhood dispensary. If you’re unsure what to ask for, inquire about the greatest purple buds a shop has.

What Are Some Popular Purple Weed Strains?

Purple weeds come in a variety of hues. Some buds have rich purple colors, while others are only light mauve or plum. It makes no difference whether one strain is more purple than the other; it’s all about their genetics!

We’ve got you covered if you’re searching for some well-known grape-like strains. Here are a few purple weed strains that you’ll adore for more than their color alone.

In addition to its name, Purple Kush has purple in it in various ways. This strain’s dark red, violet, and pink hues make it easy to spot as Purple Kush. It also has a flavor that reminds one of purple grape juice, sweets, or wine. If the appearance and delicious flavor aren’t enough, it’s also 100% indica so you can relax deeply giggly and happy.

Granddaddy Purple is a one-of-a-kind, highly sought-after purple variety created by a combination of Purple Urkle and Big Bud. In the early 2000s, an American cannabis breeder named Ken Estes developed this indica-dominant purple plant strain, which has remained popular.

The scent is nice, with hints of grapes and berries. GDP is used to treat pain, stress, loss of appetite, and sleeplessness in the population. 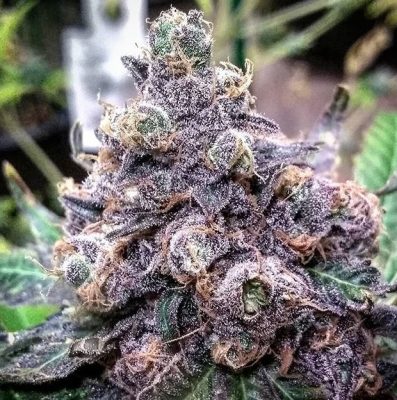 Purple Haze is a rare, 100 percent purple sativa strain that is highly coveted across the world. This purple marijuana plant is quite popular, and it was named after Jimi Hendrix’s 1967 song Purple Haze.

The flavor is savory and sugary, and its aroma will remind you of berries and spices. Purple Haze is a popular option because it encourages creativity in users.

It wouldn’t be right if a weed strain was named after Barack Obama and yet failed to live up to expectations. We assure you that the characteristics of this purple weed are not only present in its name. It may not appear to be as purplish as those described previously, although it does have faint purple hues and is popular among consumers for its power.

The strain is called after its distinct flavor, which has notes of citrus and coffee. It’s a cross between Afghan Kush and OG Kush with a strong euphoric high.

The name “Sour Grape” says it all. The fruity scent of this purple weed strain has earned it a reputation. Sour Grape is an indica-dominant combination of Sour Diesel and GDP with a touch of sourness to round it out. This strain, we’d say, is powerful, pure, and oh-so-purple.

This is a requirement if you want to feel balanced and energetic at the same time. According to stress therapy patients, it aids in muscular tightness alleviation, as well as providing relaxing effects, making it an excellent stress reliever.

There’s a lot of noise, with many accounts telling how the purple marijuana flower came to be. The vast majority of these stories are based on what causes marijuana to turn purple and what cultivators do on their farms in order to develop these cannabis strains. Let’s look at some common misunderstandings about how purple marijuana strains are made.

Unquestionably, nitrogen is required for the development of marijuana. In fact, one of the most crucial macronutrients for cannabis plants at various phases of their growth is nitrogen. nA macronutrient is a nutrient necessary for plant growth and survival – nitrogen has an impact on plant development, productivity, and yield.

Many people believe that a cannabis plant will turn purple if it isn’t watered on a regular basis or if it is not watered at all for an extended period of time.

The notion that cannabis plants produce purple flowers in the wild as a result of a scarcity of water is incorrect. Despite changes in water quantity, cannabis plants thrive in the wild under various conditions with varying water availability, and while they adapt to variable quantities of water supplied, none of the variations cause them to produce purple weed blooms.

Myth #3: Depriving the plant of oxygen or carbon dioxide

You’ve probably heard that overwatering your cannabis plant will reduce oxygen absorption and induce the leaves to turn purple as a result of water scheduling. Alternatively, if you keep your cannabis plant’s CO2 levels low enough, you’ll be able to harvest purple buds in no time.

Many farmers have used these starvation methods to produce purple colors in their cannabis, but many others have tried and failed. The most important thing to remember is that O2 and CO 2 are essential for cannabis plants. Depriving your plants of one or both will severely impair their metabolism, resulting in a sickly plant with a low yield. You might be getting a color similar to the one you want, but not the potency or abundance of harvests that your plant would provide. So which do you prefer: gorgeous flowers or purples that are too potent?

The amount of light a cannabis plant receives may have an impact on how quickly it develops during the vegetative stage as well as when it blooms. It’s been claimed that in the search for greater purpleness, long-term lighting and increased illumination intensity can lead to purple weed flowers.

However, there is another factor to consider:

If you want your cannabis plants to flourish, you should avoid subjecting them to any harsh conditions, as these urban myths insist.

Let’s take a look at what’s real about purple bud, now that you’ve heard some of the most prevalent misconceptions. What causes marijuana to become purple in the first place? What impact does cannabis with a violet tint have?

What causes marijuana to be purple? The reason is anthocyanin. Anthocyanins are phytochemicals present in various flavonoid categories that cause plant colors such as red, blue, and purple. Because of the presence of anthocyanins in blueberries, they become blue, and these natural chemicals account for the brilliant color of purple weed.

The color of purple in marijuana is caused by the presence of anthocyanin pigments, which Marijuana Botany claims are necessary for a cannabis strain to turn purple. In other words, if all other factors are equal and favorable to the procedure.

Fact #2: Purple weed flower is not a cannabis superpower 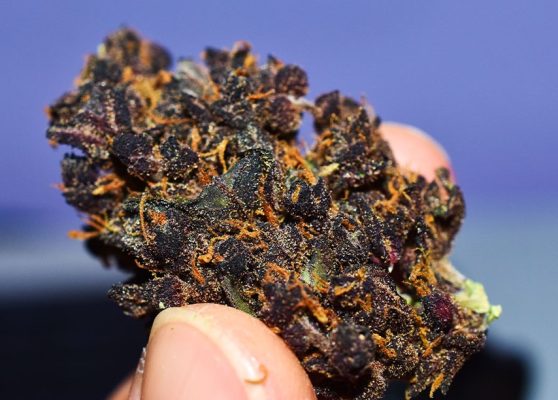 What are the effects of purple weed? Is there anything unusual about it?

Purple weed strains are sought after by consumers since they believe they will provide something unique. However, the color of a plant’s leaves should not be relied on to determine its quality. There is no scientific evidence that purple marijuana strains differ from one another based on their hue. The color may entice you, but there’s more to it than meets the eye.

Beyond the hues, a weed strain’s strength is largely determined by its genetic makeup. Next time you have Purple Haze cannabis and feel very calm, remember that it has nothing to do with the color and everything to do with the cannabinoids, terpenes, and other chemicals.

Ignore all of the incorrect data and concentrate on two things if you want to learn how to grow purple marijuana:

If you have these two in place, you’ll be well on your way to growing purple weed.

Under the proper conditions, many cannabis strains have a distinctive ability to turn purple. If you cultivate one of these strains, it will put on a brilliant show of leaves during harvest time.

However, the majority of strains will never become purple no matter how hard you try. In such situations, your plants are more likely to be damaged than affected by the color. As a result, it’s usually not a good idea to give it a go.

Purple weed, in particular, stands out. We are naturally drawn to anything new, and no one can deny that purple marijuana is stunning. So, if you’re sick of green and want to try something different, why not grow purple marijuana? How did it go for you?