Between 50 and 70 million Americans suffer from a sleep problem, according to the American Sleep Association. Many people have been diagnosed with insomnia, which is a variation of this condition.

Insomnia can take many forms, ranging from brief symptoms to a persistent condition. The latter is when sleeplessness occurs three or more times each week for at least three months.

Cannabis advocates claim that the plant has the power to alleviate these problems and help people obtain a good night’s sleep. Is this, in fact, the case?

We’ll look at the science behind cannabis for sleeplessness.

The most common problem with sleeping is failing to do so; nevertheless, it includes difficulties remaining asleep, waking up several times throughout the night, or waking up early and being unable to fall back asleep. Regardless of the symptoms, many people report feeling restless and uneasy after their rest.

Sleep deprivation has consequences that extend throughout the day, as sleep is such an important function. Individuals who suffer from insomnia may encounter a variety of problems, including: 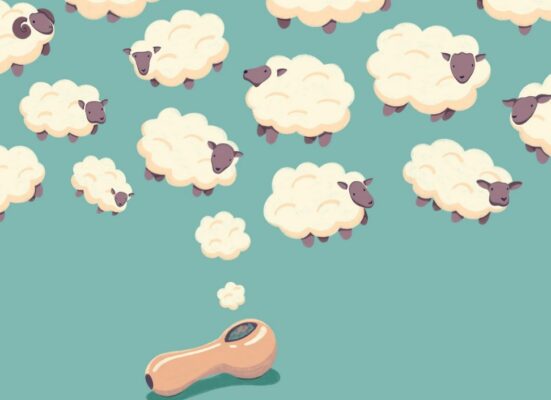 Insomnia is challenging to deal with, especially when it interferes with one’s productivity and/or efficiency. According to a recent research, insomnia has an unfavorable influence on job attendance and performance. It also leads to increased healthcare expenditures, which is bad news for both employers and employees.

Chronic sleeplessness may have long-term health consequences. It can result in weight gain and serious medical issues such as high blood pressure.

Furthermore, sleeplessness frequently occurs along with mood disorders such as depression. As a result, it may create a vicious cycle in which depressed people become more sad due to lack of sleep, causing both problems.

What’s the science behind this?

Cannabis contains a chemical called Delta-8 THC. It’s a sedative that makes you fall asleep. Terpenes, the active components of this plant, have also been recognized to promote sleepfulness. They have an therapeutic impact on the body as well as pain and inflammation reduction.

The body’s GABA system is activated by terpenes. Gamma-aminobutyric acid (GABA) is an amino acid that functions as an inhibitory neurotransmitter. It reduces brain and bodily activity to induce sleep, which helps you relax your mind and get a good night’s sleep. It significantly lowers stress and anxiety levels in your life.

Cannabidiol (CBD) helps you to relax and fall asleep by relieving pain and anxiety. It unwinds your mind and body to help you relax. As a result, it’s easier for you to nod off.

CBD promotes alertness by reducing daytime drowsiness. This restores your sleep-wake cycle, which is useful in treating insomnia. It also does so without making you feel “high.”

Today, there are a number of traditional treatments for sleeplessness. Cognitive-behavioral therapy (CBT), pharmaceutical medicines (Ambien and Lunesta), and behavioral and lifestyle modifications are all examples of this.

While pharmaceuticals can help some people, clinicians don’t recommend relying on sleeping pills for longer than a few weeks. Furthermore, side effects of common medicines might include daytime drowsiness and/or an increased likelihood of falling. Some are turning to alternative treatments such as acupuncture, while others are searching for natural cures and supplements that work.

Melatonin and amino acids such as tryptophan are two examples of popular sleep aids. Valerian, passionflower, and hops are some popular herbal treatments. Not all of these natural cures have much evidence to back them up, however.

So, is it true that cannabis can help you sleep? For years, people have recommended the plant as a sleep aid, but is there any research to support these claims?

Insomnia and Marijuana: What’s the Relationship?

The subject of insomnia and marijuana is a difficult one. Because cannabis is a Schedule 1 Controlled Substance, well-designed research studies have been limited in order to assess the effectiveness of cannabis on sleep problems.

So, since there aren’t enough scientific research on cannabis for insomnia to determine whether it is effective, does this imply that it isn’t? Certainly not. It’s just a question of mixed results.

Cannabis has been shown in numerous studies to improve sleep and sleeplessness. However, several examples illustrate the opposite may be true. We’ll go through a few of them below.

Cannabis and Insomnia: The Pros and Cons

Both beneficial and detrimental aspects of cannabis use have been discovered in studies on sleep and insomnia.

Back in 1973, cannabis studies were already being conducted on insomniacs. THC (or tetrahydrocannabinol, the main component responsible for the cannabis high) was found to aid people fall asleep faster in a study conducted. 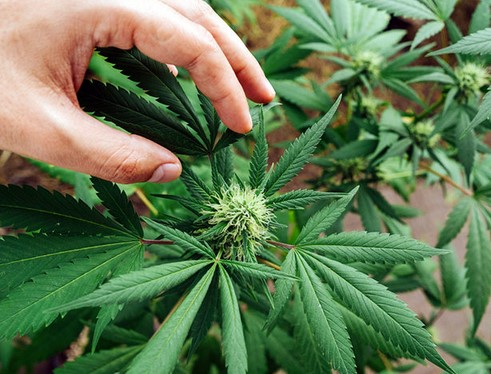 Another significant study was published in 2004, which revealed some interesting findings. It revealed that while 15mg of THC was a sedative, 15mg of CBD (cannabidiol) was a stimulant, keeping certain patients awake.

According to a 2008 study, cannabis decreased REM sleep, which might indicate fewer dreams and less vivid ones. As a result, it may be beneficial for people suffering from PTSD. However, adequateREM sleep is thought to be advantageous to learning memory and mood in general, so reduced REM sleep may not necessarily lead to greater health.

Cannabis has numerous aromatic chemicals known as terpenes, some of which may help you sleep. THC and CBD are just two of the hundreds of compounds found in cannabis.

Over the last several decades, scientists have learned more about the cannabis plant and now realize that it is more complex than they had previously imagined. Aside from cannabinoids such as THC and CBD, the plant contains fragrant components known as terpenes. Myrcene and linalool are two examples of scents that have been linked to sedative properties.

Finally, cannabis can help alleviate pain and other symptoms, suggesting that if pain is a cause of their sleeplessness, users may be more comfortable and sleepy. According to a 2014 study, while the evidence was inconclusive overall, persons who suffer from condition-related sleeplessness may benefit.

Although the effects of marijuana-infused edibles take longer to manifest than those of vaping or smoking, edibles’ effects can be felt for considerably longer. As a result, many individuals believe that edibles may have a more beneficial impact on sleep disorders. However, this is based on personal experiences rather than clinical research.

Cannabis isn’t a magical cure-all when it comes to sleep. Even if cannabis helps with sleeplessness symptoms, they may resurface once the user stops consuming it.

Chronic cannabis users had poorer sleep quality after quitting, according to a 2008 study. On the first night of the research, their total and slow-wave (deep) sleep durations were both decreased below controls. They also had worse sleep efficiency, longer sleep onset, and shorter REM onset than controls on the second night.

It appears that cannabis withdrawal can produce a rebound effect, reducing stage 4 sleep and increasing REM. As a result of this, many users who quit using cannabis after long-term use report sleeping difficulties and vivid dreams.

It’s important to remember that alcohol and cannabis are not exactly the same. Furthermore, just as uncontrolled drinking might cause a hangover, so can cannabis. As a result, smoking marijuana before bedtime may result in less performance the following day.

CBD, which does not cause a high, may be an appealing option for those who do not wish to get high. CBD, on the other hand, may be a viable alternative to THC for individuals wanting to avoid intoxicating effects. However, there is conflicting evidence about the subject. It also appears that while large doses of CBD can lead to tiredness, lower doses might have the opposite effect.

The Truth About Marijuana and Insomnia

Despite this, many individuals utilize cannabis as a sleep aid even though more study is required and it may be confoundning. The difficulty is that performing marijuana research under existing Federal legislation is very difficult.

The influence of cannabis on insomnia is uncertain from a research standpoint. However, anecdotal evidence suggests that it might assist, at the very least in some situations.

For individuals who are unable to access legal marijuana, CBD oil may be a good alternative. It is lawful in most states as long as the product is made from hemp and has less than 0.3 percent THC content.

What does the research say?

Many studies have shown that Cannabis can help with sleeplessness. Here are some of their findings:

In a natural setting, the use of raw, natural medical cannabis flowers to treat sleeplessness was investigated in a 2018 research. 1056 therapy sessions were completed on 409 insomniacs using medical cannabis. Patients’ health improved significantly after taking Cannabis flower. Customers are unsure about what product to buy and want assistance from a Nature Bloom member.

The brain’s pleasure center is activated by tetrahydrocannabinol (THC), the mind altering chemical in cannabis. This leads to a sense of euphoria or ‘high’ in the user.

According to a recent study, having a high concentration of THC in a marijuana strain reduces the amount of dream sleep. REM sleep is known as Rapid Eye Movement because it occurs while you are dreaming.

CBD has been shown to help with chronic pain, and it appears that THC limits the aspirations while sleeping, which is beneficial for people suffering from PTSD. It indicates that their night terrors decrease as their sleep quality improves. The end effect is deep sleep with fewer disturbances.

What should you do when cannabis acts as a sleep disturbance?

Cannabis is unique in that it may be used for both therapeutic and recreational purposes. It makes you feel wonderful and lifts your spirits. But, to experience the benefits of the strain, you’ll probably need to consume a higher quantity.

One must also know how to set a limit. It’s possible to develop anxiety if you consume too much marijuana at once without any preparation. As a result, your sleep cycle is affected, and you experience sleeplessness.

If you find yourself in this situation, a good solution is to participate in a detox program. Detoxification is the process of removing all poisonous chemicals, including marijuana remnants, from your body.

According to this fact sheet, it may be done naturally or with the aid of various THC detox pills. It is a 10-12 day cleanse that fully cleanses your body. You can customize it based on your personal preferences.

After these foreign noxious chemicals have been eliminated, your natural sleep cycle is restored. Improved sleep quality leads to enhanced general health and mental well-being.

We’ve reviewed all of the evidence and facts, and we’ve reached the conclusion that Cannabis might help cure sleeplessness if used properly. Do not take more than the advised amount since it may worsen the condition and cause other health problems.

It’s always a good idea to talk to your doctor before taking Cannabis as a sleep aid, just to be on the safe side. They would know better if it would genuinely be helpful for you, considering your health condition.

The increased prevalence of cannabis and its acceptance as a legitimate medicine have no doubt enhanced its significance. But there is still a long way to go if we are going to fully comprehend its power.

As we mentioned before, Cannabis contains two distinct types: Indica and Sativa. When it comes to sleep, Indica is considered superior than Sativa. It helps you fall asleep swiftly and keeps you sleeping soundly.

Don’t expect any sleep medication to cure your insomnia. Sleep medications, including prescription and nonprescription varieties, are only meant for short-term use in emergencies. If you continue to have sleeplessness, see your health care provider or talk with one of our board-certified sleep specialists.